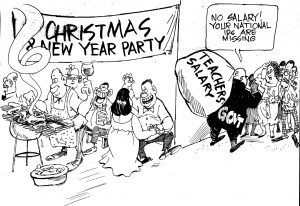 Classes were suspended in most schools this week across the country as some teachers from primary and secondary schools as well as teachers’ training colleges were on a nationwide strike.

The issue is that they were rightly demanding their salaries for December after being skipped on payroll. Government claimed the teachers were skipped because they did not submit their national identity cards details to Capital Hill.

The main issue that was on lips of Malawians this week was obviously the arrest of businessman Thomson Mpinganjira in connection with the attempted bribery of five judges deliberating a ruling in the elections case in which Malawi Congress Party leader Lazarus Chakwera and his UTM counterpart Saulos Chilima asked the Constitutional Court to annul the presidential results in the May 21 elections.

The two want the court to declare that there were irregularities although the Malawi Electoral Commission declared President Peter Mutharika as the winner of the presidential poll.

I agree Mpinganjira’s arrest was the big one. It could not get bigger than this.

It is obviously a scandal of epic proportions for Anti- Corruption Bureau (ACB) to arrest one of our foremost respected businessmen who owns a bank.

And so by all standards, it is an earth-shaking story to have ACB arrest Mpinganjira as a suspect in the attempt to sway judges by using bribes to rule in his favour in the historic case that is making every Malawian to be on the edge.

Add to the mix Mpinganjira’s midnight release from police custody after lawyer Lusungu Gondwe obtained an order from Magistrate Bennedict Chitsakamire in Zomba, putting aside the warrant that made ACB arrest the businessman, what you have is an explosion of a scintillating thriller like a movie.

The legal manoeuvring that followed between ACB and Mpinganjira’s legal team is only stuff of legend.

Malawi is truly at a dangerous crossroads.

The period we are living in as we wait for the ruling of the presidential election results case is truly difficult.

The country is in a state of crisis and the arrest of Mpinganjira epitomises it all.

No wonder then that it has been a huge talking point among Malawians both at home and abroad.

But we should not lose sight of another incident this week that also epitomises the breakdown of moral order in the country and it was the fact that some teachers shaping the future of this country in the classroom went through the festivities of December and January without a salary.

Championed by Teachers Union of Malawi (TUM), the teachers staged a countrywide strike that turned ugly in some instances, degenerating into violence that reportedly and tragically cost a life of a kid in Mponela and loss of an office in Karonga after it was allegedly torched by the irate pupils.

Now, the teachers’ salaries are already meagre, some getting as low as K60,000 per month and yet someone in government thinks this is fine and justifying the delay on the basis of national identity cards.

This is just inhumane. Everybody was having fun during the festive period with some workers receiving their salaries well in good time, some with bonuses.

Here is a government torturing its own teachers and being oblivious to their needs at a time everyone is having fun after spending twelve months toiling.

This does not make sense and it is inhumane, I repeat.

In any case, it turned out the teachers presented the IDs but they got lost along the way to Capital Hill, signifying debilitating incompetence and ineffectiveness so pervasive in the civil service.

In the end, the matter is another reminder of the shabby treatment teachers have always received from successive governments and none of them has been able to stop it once and for all.

The victims in all this is about the proverbial grass suffering, who are the children of poor people, as the two elephants are haggling.

Do authorities care much about children of poor people knowing pretty well that government schools have been left to such children while those with money send their kids to private schools?

Would the poor people be justified that probably this is the reason the officials in ministries of Local Government and Education do not care to look after the teachers that teach children of poor people because they send theirs to private schools?

We know education is continually being decentralised to local governments yet the central government has retained some control. Is it this the confusion that is bringing chaos?

This country is already tensed up with so many things happening. We have lost property and buildings during the past seven months since May 21 elections.

Some of the issues helping raise tension are not necessary if officials knew what they were doing.

The strike by teachers is another scandal this week the country did not deserve.