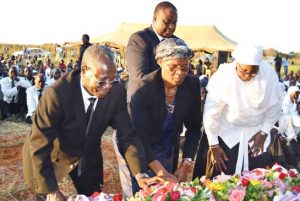 Thousands of people Sunday gathered at Tithe Farm, in the area of Traditional Authority Wimbe in Kasungu to bid farewell to Effie Pelekamoyo, who was the wife of former Reserve Bank of Malawi (RBM) governor, Francis Pelekamoyo.

She died on Wednesday.

Family members, government officials, active and retired politicians, the clergy, chief executive officers of some companies, and many others were in attendance.

A long queue of mourners meandered through Pelekamoyo’s yard as they waited to pay their last respect.

It was a sad day, bidding farewell to a woman, who in her life not only cared about her family but also her community and even beyond.

It is not just a loss to Francis Pelekamoyo and daughters, Dales and Chimwemwe and family members.

The crowd that gathered at Tithe Farm was just evidence that in Effie Pelekamoyo, many have lost a great woman, who lived from September 12 1948 to May 17, 2017.

In their eulogies, different people hailed her for different roles she played in her life.

Nkhoma Synod of the CCAP, through Reverend Archwell Katani Mwale, said the deceased together with her husband played a crucial role in the establishment of the Synod’s central fund.

“The establishment of the central fund was led by Mr and Mrs Pelekamoyo. The synod’s financial system has changed because of the Pelekamoyo family’s guidance. She led an exemplary life. Let us all be like her,” Katani-Mwale said.

Pelekamoyo’s widower, Francis Pelekamoyo, is Chairperson of Board of Directors of Times Group.

Speaking on behalf of other directors, Dr Bernard Zingano, Pastor Jane Dzanjalimodzi and Ken Kandodo who were also present at the ceremony, the company’s Managing Director, Leonnard Chikadya, attributed the success the company has registered in the past 13 years to the deceased.

“In 2004 we made a decision to have Mr Pelekamoyo as chairperson of our Board of Directors. Today, the company is back on its feet. But all this success, has been possible because of this woman. She was a pillar, we have lost a great woman,” Chikadya said.

Dr Patrick Chirwa, one of the Directors of Kamuzu Academy Board, said people should emulate the example the late Effie Pelekamoyo set in serving God.

Similar remarks were made by New Finance Bank Director, Dean Lungu and Member of Parliament for Kasungu East Madalitso Kazombo.

“Mr Pelekamoyo and his wife have been assisting us. There are some women who stop their husbands from assisting others. That was not the case with Mrs Pelekamoyo,” he said.

According to Macloud Tsilizani, who spoke on behalf of the bereaved families, 10 years ago, Effie Pelekamoyo, who was from Dowa, made a decision to be burried in her husband’s village, in Kasungu.

“She was a dedicated christian, hardworking, and willing to serve. She was a serving church elder at Lingadzi CCAP. She even built a church in her home district of Dowa. She was a pillar in both Mtimuni and Pelekamoyo families,” Tsilizani said.

Which ball is in play? Part 2