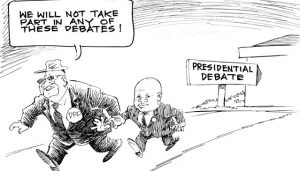 The campaign is in full swing and March 19, when the Malawi Electoral Commission will declare that the 60-day campaign period commences, is around the corner.

To show that the political season is upon us, MCP on Saturday launched a 72-page manifesto at a colourful and well-organised event in Lilongwe.

Some of the eye-catching promises the party is making to Malawians are that it will raise the minimum wage from K25,000 to K50,000; to increase Paye tax-free band from K35,000 to K100,000 and reduce vehicles on the presidential convoy to not more than 10.

Other promises include reducing presidential powers in public appointments, freeing MBC from the control of ruling parties and that Lazarus Chakwera will work from Capital Hill if elected into office.

Apart from MCP’s manifesto, other candidates such as President Peter Mutharika camped in the North where he was projecting himself as a champion of development, opening big water projects and roads in Mzimba, Karonga, Chitipa and Nkhata Bay.

The President even declared in Karonga the other week that he had abandoned the life of tussling with opposition politicians and all he cares about is development; that he will stop responding to opposition attacks that he has done nothing on the ground to warrant a second five-year term on May 21.

But all the leaders are doing now is to conduct rallies, talk to the masses and, now, release manifestos, without the masses talking back to them to account for their actions as well as the masses telling the leaders what is on their mind to improve their lot.

That is why civil society plus media are organising debates and such other forums to have a chance to talk back to their leaders by asking them questions in a controlled environment, with such interest groups as Media Institute of Southern Africa-Malawi and Federation of Disability Organisations in Malawi taking the lead.

Voters are generally a selfish lot and look for the things that concern them directly; issues which any meaningful manifesto must address.

So the question is: Has MCP’s 72-page manifesto lived up to that billing?

No manifesto is perfect but MCP has tried to do what is expected of them by attempting to put money in people’s pockets by promising outright that it will increase the tax-free salary band from K35,000 to K100,000 for example.

Malawians are heavily taxed and, everywhere they go, it is all about tax and more tax, ranging from the payslip to the shop where they buy daily needs to even things such as newspapers.

Then there are issues that bother Malawians much such as the mile-long presidential convoy with expensive fuel guzzlers that zoom past by us all the time at speed, amid rampant poverty and attacks on people with albinism which MCP says will attract the death sentence without clemency.

Other issues of concern are the police lining up the road all the way from Blantyre to Lilongwe when the President is travelling and MBC’s constant bias towards DPP when it runs on our tax.

All these things must be dealt with in manifestos for parties that really think and act in a way that shows they represent Malawians and are willing to address their concerns.

MCP has largely delivered in these, just like they have plans in key sectors such as education, health, agriculture, tourism, mining and land administration.

The concern, though, is that they have over promised with doubts over initiatives such as giving each secondary school student a laptop, although one understands that the promise is just to underline the importance of ICT in development: Every child deserves to have access to ICT in this 21st century.

Should MCP fail to deliver if Malawians give it power on May 21, Malawians will hold it accountable.

And talking of accountability, lately, there has been an attempt by some leaders to feel big and ignore calls of Malawians to hold them to account in the name of debates or meetings with special interest groups.

In 2014, Joyce Banda ignored the presidential debates just like her running mate Sosten Gwengwe, who only attended one in Lilongwe and ignored the other in Blantyre.

This year, the story is not different with DPP announcing that both Mutharika and his running mate Everton Chimulirenji will not take part in any debate, arguing they have no confidence in those organising the showdowns.

This is dead wrong because Malawians want to hear from their candidates in an environment where the candidates are not in control to see what they can say and how ready they are to defend their record.

Those who feel big and refuse to humble themselves are saying Malawians who want to hear from them can go to hell when on May 21 they expect the same Malawians to give them their vote, which is a total contradiction.

These debates or meetings are watched by millions of Malawians eager to see and hear what their leaders will say and who deserves their vote and has plans to safeguard their futures and that of their children.

History shows that it does not end well for politicians who think they are big by failing to avail themselves and be quizzed by the people of Malawi.

Mutharika and Chimulirenji are incumbents.

Every day, they are defending their record, with the President wondering in Karonga whether people who say he has done nothing live in Malawi, or not, where he claims he has come up with tremendous development.

Malawians hear this every day and some of them agree with this assessment while many others disagree with the President and are of the view that Malawi is on a wrong development trajectory and that nothing is happening on the ground, with poverty levels getting worse by the day.

Let us, for a moment, agree that, indeed, Malawi is on the right trajectory and, if that were the case, why should it be difficult for the President and Chimulirenji to go on the mountain top and proclaim it on top of their voices without being afraid of attacks from the opposition?

I hope the President changes his mind and will do as he did in 2014, when he was among the 11 candidates that braved the presidential debate and, at the end of that process, became the winner.

He should set an example to the rest of the candidates on the art of humbling themselves to submit to the will of Malawians from whom they want their votes come May 21.

In conclusion, Malawians do not want to hear rocket science from their candidates.

Neither do they want to hear how planes are manufactured in Europe or America by Boeing and Airbus.

What they want is that their candidates should be placed in a controlled environment and be subjected to questions they have no control on issues that affect Malawians.

And what affects Malawians are simple things such as their poverty versus rural economy, agriculture, health, social welfare and the list is endless.

They want jobs for their children and efficient use of public resources and a stop to evils such as corruption, which is derailing everything.

They want solutions to emerging problems such as the changing weather patterns that are killing a large section of the population like it has happened during the past two weeks as well as the attacks on people with albinism.

Plight of people with disabilities in disaster areas