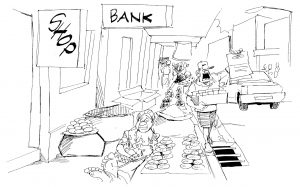 Several years have passed since Malawians mastered the art of street vending, and there are others who have inspiring stories to tell; such as, how they managed to support and raise their families, siblings from the very vending business. And then we have those trading in undesignated places; the ones fighting for ‘survival’ and in ‘constant battles’ with the authorities for encroaching on areas they are not supposed to. A majority of these are the ones who usually give a torrid time to motorists, pedestrians with their ware.

Anyway, that is beside the point. What triggered this avalanche of thought is the recent altercation between vendors and city authorities in the country’s major cities. I am strongly of the view that this would have never happened had those entrusted with responsibility, over the years, acted right in the first place.

Let us face it, some of the street vendors are a menace to society for fuelling things such as pick-pocketing, thuggery and disorderly conduct. You even tend to wonder sometimes on what exactly some of them are selling in awkward places at even awkward hours. That perhaps explains why they are constantly engaging in running battles with law enforcers.

But hang on a minute, would someone just wake up and decide to give a torrid time to city fathers just for the sake of it? That is where the real issue is.

After 27 years of multiparty democracy, we still have not seen any state-of-the-art infrastructure that can house our street vendors. If you critically look at the existing flea markets or designated stalls, you are likely to discover that they leave a lot to be desired. If it is not a case of dry taps, then you can be assured that the toilets would be in a despicable mess or that the structures are not in a habitable state. Little wonder, at one point in time, most of the flea markets were easily being razed down to the ground by fire.

Yet, on this very continent, some countries are miles ahead when it comes to issues of trade, particularly street vending. In these countries, there are shopping malls and beautiful complex housing vendors and their streets are actually cleaner. This was the path that Malawi was supposed to take and, by now, we would have had such infrastructure dotted all across our towns and cities. But here we are, day in, day out, with street vendors practically taking over the spaces in our streets and tussling with authorities and who is to blame? If you ask me, it is the city councils, because their officials, as well as those who punch their way there on political ticket (ward councillors) did not have the vision and foresight to plan ahead and yet we have whole departments of planning and development in these councils. We certainly deserve better.

There is one particular football player who always seems to go out of his way to display his irresponsible behaviour to the public. One Khuda Muyaba (I hope I got the name right) went to town on the Flames coach the other day, apparently after being left out in the cold. In his warped thinking, he believes Coach Meck Mwase has a bone to pick with him, which explains why he seems to always be ‘entangled’ with the Flames technical team.

Lo and behold! In comes Khuda’s wife, who we are told is also a player for the female national football team, joining the fray by spitting a couple of unprintable lines directed at Mwase and his technical team. For a minute, I felt like taking matters in my hands and shutting the two up myself.

What I want to emphasise is that every great player knows that greatness goes hand in hand with discipline and for one to stand head above shoulders from the rest; it is not just the skill on the ground that sets you apart but also largely how you behave. Malawi has had a litany of football stars, some of whom have even gone to scale greater heights than our dear ‘Khuda’ has. At least, when you make a mistake once, you are given the benefit of doubt but if you constantly run your mouth every time things have not gone your way, then certainly that is going to create a problem. As an ex-soldier, Khuda should be the first to know that and his wife is not helping matters. Indiscipline has no room in our national teams and I commend Mwase for keeping a cool head. Even if the player had solid arguments but the way he has gone round presenting his case is downright wrong! It is about time somebody put Khuda and his better half in their place.