American gospel musician and pastor Travis Greene said Wednesday he was feeling blessed to visit the country for the first time to perform and that people should brace for praise and worship through music.

Pastor Greene will perform at the launch of Wendy Harawa’s album Wandiyitana at Bingu International Convention Centre (BICC) in Lilongwe on Sunday.

Initially, Greene was set to perform on the night of September 17 but due to his engagements in Zambia, Wendy decided to shift the show to September 18.

The artist, who featured in Tim Godfrey’s track titled ‘Nara’, will jet into the country on Saturday ahead of the launch, which will also feature the country’s acts Lulu and Paul Kachala as well Zambia’s Abel Chungu.

“Honestly, as with any show, I am excited to spend time with the people who will come out to experience God through worship. I have waited for a long time to come to Malawi,” he said.

Greene promised a performance full of energy and that his whole team was ready to worship through music.

“I feel so thankful and blessed to get to visit my Malawian brothers and sisters for the first time. It definitely won’t be the last. You all truly hold a special place in my heart,” he said.

The American musician said it was God’s plan that Wendy reached out to him and that this was the right moment for him to come to Malawi.

“There will be dancing, jumping, singing and worshipping in the presence of God. I am just a vessel willing to be used to help make it happen,” the artist said.

Wendy, who used to star in secular before turning born again, said she has grown spiritually and that Wandiyitana was all about exalting God and worshipping him.

“I am well prepared. Everything is ready and all artists including myself will perform live with a band. This will be a night for people to remember and there will be such great anointing. I encourage each and every person to attend this launch,” she said.

The 12-track album was recorded in Kenya, Uganda, Namibia and South Africa.

“I worked with different producers in and outside the country and they include Lulu and Lawi,” she said. 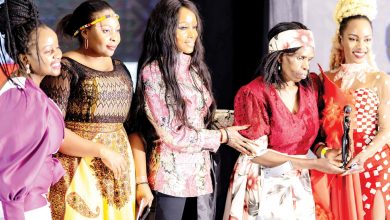