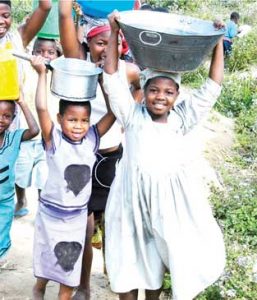 A sound of pounding metals at the foot of the hills of Chilomoni ‘Zambia’ in Blantyre sting one’s ears when around this place. It is the only sound you hear. Getting closer to the place, you are likely to assume it is a dead place since it is, minus smiting of metals, very quiet.

Children are rarely seen roaming around and sometimes not even a sound of a radio can be heard.

Waking up in the morning, you rarely hear the sound of birds. This does not mean birds are inexistence in the area but, rather, the beating of metals by the Apostolic Church members scares them from singing the morning melodies.

Chilomoni is a fraction of the many Apostolic Church members living in the country.

Although the population is small in this hilly part of the commercial city, their lifestyle is appealing to the attention of many people.

Their dressing, appearance and culture are not any different from those living in other parts of Malawi. However, their fast growing culture and interest in tinsmith is so appealing for someone to develop the urge of wanting to know more about their lives.

Beating and ‘deforming’ metals into shapes of different household kits is a life among folks and families.

It is no longer a secret that even boys as young as seven years old regard tinsmith as their only promising and potential future.

Despite most, if not all, church members engaging in tinsmith for a living, there is no direct relationship between the church and the artisanal skill, according to Atanazio Chidakwa, Reverend and Overseer of the Apostolic Church in Malawi.

Chidakwa says the only role that the church plays is encouraging its members to engage in blue-collar jobs for their survival.

This, Chidakwa reveals, is also what their Apostle and Founder of the church Baba Jowani Masowe advocated.

Masowe, a Zimbabwean, believed in vocational skills and through these skills, he was assured of less suffering by his church followers.

“Normally, it is the church’s principle that every member must at least have some technical or vocational skills. This is done to prevent members from engaging themselves in immoral acts such as stealing, which in the end may tarnish the image of the church,” Chidakwa says.

However, deciding what type of work to undertake for a living is dependent on individual’s choice.

As to why three quarters of its members are into tinsmith, Chidakwa says it is the only viable business among many and that followers find it easy to train their children.

“Carpentry and joinery, brick laying, welding and many more are the businesses that we encourage our members, especially men, to do. But many people choose to venture into tinsmith because of the profits it brings to their homes,” he says.

Chidakwa adds that many Apostolic Church members do not like missing church services and that is why they refrain from working for a company or an individual.

Working for someone or a company, he says, may weaken their faith.

“There are some institutions that work on Saturday, which is our Sabbath. Therefore, to avoid conflict of interest, most of our members decide to do individual businesses with tinsmith as one of them,” says Chidakwa, adding that doing personal businesses give them total control of every aspect of their life in both spiritual and bodily terms.

For the apostolic faith, women are not allowed to do any work presumed to be for men.

Says Chidakwa: “We allow women to sell products made by their husbands who are in tinsmith but not them doing the work.

“But for their survival and economic empowerment, the church encourages them to do some home economics like knitting and decorations.”

Apart from the technical skills, church members are further encouraged to venture into other businesses so long as such economic activities do not complicate or clash with the church’s doctrines.

The apostolic church has no training school for tinsmith and other skills. But to avoid paralysing the trend, parents are forced to train their children. And in instances where a new member has joined the church, he or she is attached to any elder member and taught of the skill.

“We have plans to have our own technical school that will even enroll non-apostolic church members. Lack of funds is the only prohibiting factor,” says the reverend.

Robson Thomasi, 42, is a member of the Apostolic Church in Chilomoni.

Thomasi was born and raised according to the apostolic principles. He is a former student from Ntcheu Secondary School.

In 1999, after his Form Four examinations, he made a bold decision to venture into the tinsmith business.

“My parents were into this business and when I finished school, I decided to follow what they were already doing. Regardless of the ridicule I get from some people, I don’t regret the decision,” says Thomasi, who is married and has five children.

Every month, Thomasi rakes more than K100,000 and it is this income that takes care of the family and sends his children to school.

The noticeable thing the Chilomoni resident boasts of owning from the business is a plot of land where he expects to construct his dream house.

“It is a rewarding job and I would like to urge Malawians to change their mindset of considering tinsmith as a vocational skill for apostolic faith members. Together we can change this country through our various technical skills,” he says.

Thomasi agrees with Chidakwa that many members of the church are into tinsmith.

He says apart from the profits that come with the trade, tinsmith is also a culture that is deep-rooted in the church.

“Tinsmith started way back and it will never die. This is so because as a church, we follow what our ancestors were doing which pleased their spirits,” he says.

The Apostolic Church, under Masowe, was established in Malawi in 1973. It has 86 branches across the country with over 700,000 members.

Out of the 700,000 members, three quarters of them are into tinsmith.

Shadreck Chikoti to speak at The Writivisim Festival