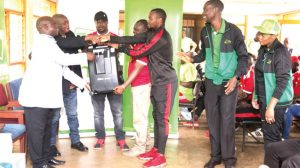 The company’s officials were accompanied by Nyasa Big Bullets players who won the 2018 TNM Super League.

TNM Head of Marketing, Sobhuza Ngwenya, said the donation was a way of fulfilling the company’s corporate social responsibility.

“As per the practice over the years, TNM, in partnership with Super League champions, engages in corporate social responsibility every year. The activity is undertaken prior to end of season awards in order to connect elite league teams and players with local communities,” Ngwenya said.

He said the donation is in line with TNM’s values of changing lives of Malawians through football.

Ngwenya said the company believes that football has the power to connect, uplift and change people’s lives for the better.

“Against that background, TNM Plc continues to partner Super League clubs in corporate social responsibility undertakings aimed at touching the lives of people most in need as is the case today for Mulanje Hospital,” he said.

Ngwenya said the super league champions selected Mulanje Hospital because the team used Mulanje Park Stadium as a home ground when Kamuzu Stadium was under renovation.

“Following the closure of Kamuzu Stadium for renovations, Nyasa Big Bullets turned Mulanje Stadium as their home ground. The champions therefore saw it fit to bring their corporate social responsibility back to Mulanje to share the joy of their triumph with the fan base that cheered them the most during the 2018 season.

“Super League games were played in Chikwawa, Balaka and Mangochi. Therefore, the 2018 TNM champions Nyasa Big Bullets selected Mulanje district as this year’s beneficiary of the initiative because they used Mulanje stadium as a home ground,” Ngwenya said.

During last year’s event, 2017 champions Be Forward Wanderers donated assorted education materials to Mwanje Primary School in Balaka District where they played most of their home games.

Training together for different battles