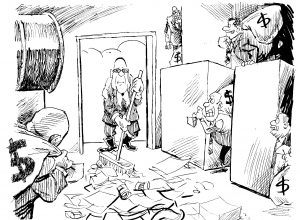 President Lazarus Chakwera on Sunday came out with a forceful tone and gait to tell the nation that he was not going to soothe the ego of anyone involved in the plunder of public funds.

It all started with revelations that part of the K6.2 billion which had been set aside for fighting the Covid-19 pandemic might have been abused by self-centred public officers who seek loopholes in every system to line their pockets with cash.

Perhaps, for the first time in the history of multiparty democracy in Malawi, we have seen a record number of public officers being interdicted or suspended because they are suspected to have been involved in the careless management of public funds.

A shake-up of huge proportions is going on in the Civil Service. So far, 10 principal secretaries and 28 district commissioners and several other officials have been interdicted.

Others have been arrested and information from the police indicates that the arrests will continue. Anyone who dipped their fingers in the jar of Covid-19 funds will have to answer for their actions.

The seriousness with which relevant authorities are responding to the President’s initial actions should be maintained so that every tambala that was set aside for fighting the raging pandemic is accounted for.

In his statement, Chakwera clearly showed that he was out to bite and not tolerate any wrongdoing. Right-away on that day, when he regularly appears to address Malawians on (Sundays), he announced significant changes in the leaderships of entities established to lead the fight against the pandemic.

He also tasked Vice- President Saulos Chilima to form a special taskforce and, in consultation with him (Chakwera), review the three government systems of allowances, procurement and employment contracts and submit recommendations for their overhaul.

If this is done successfully, it is billed to significantly cleanse a polluted public service that has championed the plunder of funds for decades.

That is why the President’s directive seemed to clearly endear him to observers who had all along felt the real cancer in uprooting corruption from Malawi was being ignored.

In essence, what Chakwera has done so far in his efforts to eradicate rampant impunity and sheer abuse of resources in the public sector should be a convenient skateboard to spring forward more duty-bearers to act on theft by those they oversee.

It would be frustrating to the President to see that some of his officers, who have powers to chastise subordinates who engage in acts of indiscipline, are turning their eyes away.

What we want to see now is everyone in the public service playing their active roles in ensuring that the cleansing that has started continues and is sustainable. We have condoned mediocrity, theft and corruption by public officers for too long.

We have seen our leaders failing to champion a strategic and strong-willed drive aimed at punishing wrongdoers. Sometimes, those wrongdoers, if sufficiently connected, have ended up being rewarded with larger posts or benefits.

At least, we are now seeing change but what matters, once again, is that this should continue until every bad apple in the system is chucked out.

For too long, Malawians have been treated unfairly by pilfers in the public service who have no regard for the welfare of others. For them, what matters is that there is something in their pockets even if it were meant to procure oxygen cylinders for critically ill patients in Covid-19 isolation centres.

The rubble in the public service must really be afraid because Malawians have been given authority to name and shame whoever goes against the dictates of their positions and professions.

Plunderers are not safe because the President has set the tone in earnest and everyone below him is naturally required to follow suit.

The seriousness in the decision to interdict or suspend dozens of public officers who ignored laid-down procedures of utilising public funds or discounted Chakwera’s directive that they should regularly report on how they were using the funds should not be dampened by anyone, whatever their interests.

There is hope, once again, that Malawi can be cleansed and that taxpayers’ and donors’ money can do its right job.

Otherwise, finally, there is strong action from the President and his officers have no excuse when it comes to acting on plunderers. It appears the cleansing is getting deeper— the sweeping brush is out there, not sparing anyone tainted with theft, corruption or abuse of office.

The corrective measures are raging across the board. A nation in dire need of redemption has no time to waste. It needs a president in charge of State affairs and who acts and pushes for more action.