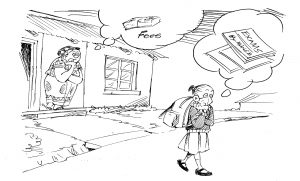 We come back today

To work and to play

Which is our classroom?

Who is our teacher?

The above snippet of an old school English curriculum poem (courtesy of that Primary School English Book by Dzuka Publishing) came flooding in my mind following the recent school restart, after months of closure due to the Covid-19 pandemic. Nobody saw it coming that someday, for months; the world would go mute, courtesy of the coronavirus pandemic and learners were probably hard done by with the development.

Most of them were up to mischief during the unprecedented break. If not abusing drugs and alcohol in the neighbourhoods, then some of them were party to the ‘baby boom’ escapades that were rife in the Eastern Region districts of Mangochi, Balaka and Machinga. Others you could spot them in their ‘skinny jeans’ (whatever that means) roaming around the streets, with bluetooth speakers on the shoulder, blaring sounds only they can understand. And then we have the moderate ones who simply slouch on the couch, remote control in hand, enjoying whatever movies or cartoons are appearing on the screen. Well, back to reality boys and girls! School is here and you better put in some serious work before examinations send you down under in the ‘swim or sink’ affair.

Oh please, calm down! I am not saying it was all dark and groom. There were those learners who, instead of whiling away, buried themselves in mounds of textbooks and fine-tuned through exercises, anticipating both the Malawi School Certificate of Education (MSCE) and the Primary School Leaving Certificate (PSLCE) examinations. You will find that these ones are not worried at all that schools are open and that soon they will be writing the exams; unlike the ones we discussed above who are already dreading the exercise.

That aside, the biggest concern for parents and guardians was how teachers and the learners would navigate in a school environment with the Covid-19 pandemic still very much a part of us, but it seems so far so good… we have not yet (I believe) recorded cases where learners have ‘battled’ over mask ownership or deliberately run the ‘sanitising’ tap buckets dry. We must remain vigilant, especially once the rest of the classes (especially junior ones) resume. We have already been told that the Covid-19 curve is somehow on a downward slope and as such, we cannot afford to mess that up by letting the situation in our schools get out of hand.

Well, there is another problem that some guardians and parents have been anxiously waiting for me to mention; school fees. Let us face it, when the announcement by government that school would resume on September 07, a majority had already blown whole or part of whatever they earn in a month and as such, they found themselves at sixes and sevens and there was no signal from either Capital Hill or private schools that there would be any leniency in as far as payment of school fees is concerned; what with some private school teachers having gone months without pocketing a salary? I am reliably informed that some grammar schools had even demanded the full amount while schools were on Covid-19 recess…what a world we are living in! I am sure most have found ways and means of squaring the bill; whether by hook or crook.

And now, the cloud of uncertainty that is left hanging above us is that of the purported demands by some teachers to receive risk allowances. Despite school opening last week, the teachers, who through their mother body, Teachers Union of Malawi (Tum) engaged the Ministry of Education, had given a seven day cut-off point to come up with a final position after their talks. Well, whether there is merit or not in the demands by the teachers is neither here nor there. And no, I will not give you my take on this risk allowances debate. What we know for a fact is that come September 21, some learners will be sitting for their exams, if the schedule that was given by the education minister Agness Nyalonje is anything to go by.

At the end of the day, ladies and gentlemen; what this country has is a daunting task to ensure that the next generation learns as much knowledge as possible, and largely that is going to be fulfilled in that classroom set-up where the teacher and learner interact. Every one of us working today or, indeed, pursuing some formal business, has at one point or another, gone through a classroom and we have a responsibility to see to it that our young ones undergo the same process, if at all we are to raise an educated nation.

It certainly takes a lot to teach a child!