This is a suspected crime that has shocked a nation. It’s a story that gives insight into what happens when a public institutions, a ruling party and State House collude to steal from the public. Mabvuto Banda attempts to unmask the role the former Inspector General played and what his deputies did to facilitate the K2.8 billion contract with Pioneer Investments, a company at the centre of the Anti-Corruption Bureau probe. 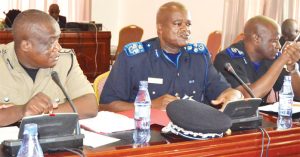 [dropcap]W[/dropcap]hen the K2.8 billion (nearly $4 million) food rations story leaked at Malawi Police Service, the picture painted was that Director of Finance, Police Commissioner Innocent Bottoman, was the only person of interest at police headquarters.

Little did we know about what role then Inspector General of Police, Lexten Kachama and deputy Inspector General in charge of Administration Duncan Mwapasa, played because the leaked ACB report did not mention of the two.

But based on internal correspondence we have reviewed, it is clear that Kachama and Mwapasa were in the know and guided Bottoman in every step of the way to complete the deal, which the Anti-Corruption Bureau is now investigating.

Among several internal communications we have seen and reviewed, Kachama, we can reveal, verified the signatures of his officers as requested by CDH Bank.

Mwapasa chaired the Internal Procurement Committee of police, by virtue of him being Deputy IG for Administration)

With the Head of State implicated in its wake, the Malawi Police food rations contract has exposed the collusion between the Democratic Progressive Party (DPP) and a public institution.

Last week, pressure to make both the DPP and Pioneer Investments answerable paid off. The High Court ordered a freeze on bank accounts of the ruling party and Zameer Karim – owner of Pioneer Investments. This was after Mzuzu based Youth & Society asked the High Court to act on the two following revelations of alleged kickbacks.

The DPP has since paid back the K145 million which Pioneer Investments banked into a DPP fundraising account held at Standard Bank in an attempt to divert the negative attention the President is getting.

But the attention has not gone away from DPP, the President and Malawi Police Service.

Below we go to the source and detail the different roles that Kachama, Mwapasa and Bottoman played to smoothly facilitate the contract and push for the subsequent payment.

He retired as Inspector General on June 30 2018. But according to correspondence we have reviewed, Kachama, as head of the institution, had knowledge of the deal and helped facilitate it.  The correspondence shows that there was no way the contract could have been processed without his involvement.

He also committed to the Bank that as per the contract signed, “Payment for delivered items will be processed through your bank within the stated period.”

The bank wanted assurances that payment of K804,409,200 would be paid through CDH Bank within 90 days. Also, the bank wanted Kachama to verify whether the signatories [Bottoman and his deputy] were authorized on behalf of police to handle a contract involving such colossal sums.

By writing this, Kachama effectively took responsibility and confirmed the validity of the contract the police had with Pioneer Investments.

In an interview with Sunday Times yesterday, Kachama declined to comment on his role in the contract saying that the issue is under investigation.

“Sorry I cannot say anything because there are people that are investigating the matter. It’s not right and proper for me to comment,” he said.

In a letter on August 7, 2017, Kachama gave his opinion on the arrears and interest Pioneer Investments was trying to claim. Yet another example of how he was involved in the whole transaction.

He was deputy Inspector General (Administration) when the food rations contract was being drawn. By virtue of holding that position in the police service, Mwapasa chaired the Internal Procurement Committee (IPC) and when the food supply contract came through, he chaired the procurement committee which ended up picking Pioneer Investments.

Several correspondence does show how knowledgeable he was about the happenings of the contract including the proposal to increase the contract fee based on exchange control losses as claimed by Pioneer Investments.

In one of the letters dated January 11 2016, Mwapasa is seen writing Pioneer Investments on behalf of police, assuring them of payment despite the delay.

“I would like to ask for your patience and request you to bear with us as we are trying hard to make the payment of K2.793,08, 500 made as soon as possible,” the letter he wrote reads in part.

“I wish to assure you that the full payment will be done by end of February, 2016.”

In an interview of Saturday, Mwapasa, just like his former boss, declined to comment when asked to confirm his role in the award of the contract to Pioneer Investments.

He has denied any wrongdoing. But he is also on record saying that the he did not do anything alone.

So when Bottom was writing the Secretary to Treasury on November 17 2015 informing him that delivery of items under the food contract had been completed and that the adjustment of the price to K4,795 per pack had pushed the value of the contract to K2,793,087,500  from the initial cost,  Kachama and Mwapasa had full knowledge of the issue.

The two also had the power  because of their positions in the service to stop the contract or could have stopped the price adjustment that Pioneer Investment claimed.

Our findings show that Bottom had help from his bosses to adjust the contract price by 20 percent, and push for payment. Yet, ACB, in the leaked report last month, did not mention any other police officer apart from him [Bottoman]

Last week, ACB boss, Reyneck Matemba, said his team had finalized investigations into the contract and had cleared President Mutharika because he did not personally benefit from the K145 million which was deposited into the party account. This has irked rights groups and the President’s critics who now blame Matembe of shielding Mutharika.

“How can the ACB today tell us that the President did not personally benefit from the contract when all know that K145 million was deposited into an account which is under the authority of the Head of State?” activist, Gift Tranpence said.

Govt told to reform or abolish Admarc to end hunger