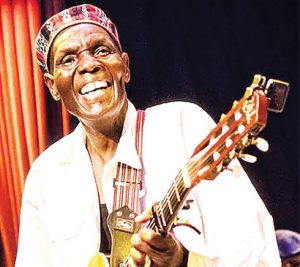 On January 23 2018, the world woke up to the sad news that South Africa’s legendary jazz musician Hugh Masekela was no more.

Fate had other ideas.

Zimbabwean music legend, Oliver Tuku Mtukudzi, has also died – on the same date Masekela passed on a year ago— at Avenues Clinic in Harare.

The world has been dealt a big blow by the death of Mtukudzi, whose Tuku music will continue to live on.

Mtukudzi was no ordinary artist. He was simply talented and his music moved souls in all the corners of the world.

This is why condolence messages are competing for space worldwide.

Mtukudzi inspired lots of musicians including in the country, where others even took time to copy his style.

In an interview with Tshisa LIVE last year, Mtukudzi spoke about his excitement at releasing his 67th album.

He said the most significant thing about his upcoming album, Hanya’Ga (Concern) was the message.

“My 67th album is meant to share a message of introspecting and I am hoping people learn a thing or two from it. It’s an album I wrote last year after I realised that the world keeps getting tangled up in ‘unnecessary’ problems,” he said.

Mtukudzi added: “[We do all sorts of things] all because we are focused on competing and being better than the next person. In so doing, we keep stepping on each other’s toes but that is not how God created us. God meant for us to compliment each other, that’s why he didn’t duplicate talent”.

Veteran promoter Jai Banda, popularly known as Mr Entertainer, said yesterday that, as someone who grew up in Old Highfield with Kuma J and Oliver Mtukudzi across the road, he witnessed his early beginning with songs such as ‘Dzandimomotera’, ‘Stop after Go’ and ‘Ndiri Bofu’.

“I remember the determination to succeed and the hard work, first with the Wagon Wheels and later Black Spirits. Oliver inspired me a lot and my love for music. As a young boy, I would go to Cyril Jennings Hall and Gwanzura Stadium to watch him perform. Oliver became my idol and, as I grew older, I followed him wherever he performed in Harare,” Mr Entertainer said.

The musician had several stints in the country and said— on arrival at Chileka International Airport in Blantyre in 2011, ahead of his performance at Blantyre Arts Festival (Baf) —that Malawi was his second home.

“I never get tired performing in Malawi because this is my second home,” he said, having starred at Lake of Stars Festival at Sunbird Nkopola in Mangochi in 2010, where he put up a massive show.

Lake of Stars Festival organisers wrote on their Facebook page that they were deeply saddened by the news of the passing of Mtukudzi.

“It was a priviledge to host him at Lake of Stars Festival in 2010. He will be missed by many,” read the post.

The Guardian of United Kingdom said after his performance at Lake of Stars that he was the highlight of the festival having swayed the audience with the joyous, rolling and jerky guitar.

Baf Executive Director, Thom Chibambo, said they were deeply shocked with the death of the African legend.

“Blantyre Arts Festival invited him to perform in Malawi in 2011. He had his welcoming performance show prior to his main show and it was during this time that he connected with Agorosso,” Chibambo said.

Chibambo said Mtukudzi also had a training workshop with various Malawian musicians prior to his Baf showdown.

“His contribution to Baf and to the Malawian audience is irreplaceable. Baf would live to remember Oliver Mtukudzi and may his soul rest in peace,” he said.

Agorosso’s manager, Emmanuel Maliro, described Mtukudzi as a musician who stuck to his music.

“He is one musician I respected as he stuck to his music. When he invited me to his 65th birthday in Harare, I sat with him for a good hour in his car, listening to his latest album. He was playing the songs one by one and paused to explain what he was saying, I discovered that he was one prolific writer and, definitely, Africa has lost,” Maliro said.

He said he had been working with him on Agorosso’s project and that they were meant to finish it.

“He was also supposed to come to Malawi this year to be at Agorosso’s album launch,” he said.

Agorosso said he was shocked and lost for words.

“I learned a lot from him, to be patient always and, above all, he gave me a guitar capo,” he said.

Poet and event organiser Q Malewezi also wrote on his Facebook page that he had the honour of hosting Mtukudzi some years back.

“Instead on an African music icon, I met a father figure. We were invited for dinner at a restaurant in Lilongwe and in the middle of the main course he asked me, Q what are you feeding us? The following day we made sure he had nsima and open chambo. The man was happy and fed. Thank you for your music and for your humanity,” Q said.

Filmmaker Charles Shemu Joyah said Africa has lost an ambassador and that humanity has lost an icon.

The BBC quoted the United States-based Zimbabwean musician Thomas Mapfumo, with whom he started his career prior to independence in 1980, as describing Mtukudzi as a great musician.

“He was a freedom fighter – that’s what I can say about him,” Mapfumo told the BBC’s Focus on Africa radio programme.

Mapfumo added: “I loved his voice and the way he used to write his music. He was such a great inspiration to those who were upcoming.”

The BBC also recalls that Mtukudzi had time to perform for them one of the songs ‘Neria’ in 2009. The song talks about the strength of women and how they should take their place and not feel inferior to men.