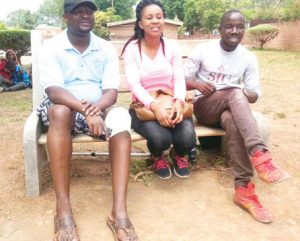 When Chifundo Mandala [not his real name] was involved in a tragic road accident in 2011, little did he know that his life was about to change drastically as he was left paralysed from the waist downwards.

Mandala had been an average basketball player during his days at Bunda College of Agriculture [now Lilongwe University of Agriculture and Natural Resources] where he graduated with a Bachelor’s degree in Economics in 2009.

Currently, Mandala is one of the key players for Black Spiders, a team that anchored the four-member log table at the end of the first-ever Wheelchair Basketball League in the country.

Yet, after graduating, Mandala felt that he was done with regular basketball, especially after securing a job as an internal auditor for one of the well-known organisations. He was involved in the accident while he was on duty.

“It was a shock because never, in my life, did I think that I would, one day, get paralysed. I spent about a year in hospital. For days, weeks and months, I was in pain, both emotionally and physically, because I felt that my dreams were over.

“Of course, my employers told me that, when I feel like returning to work, I should inform them as they are ready to create a post for me. I am about to settle down and I will see how to go about it,” he says.

Mandala refuses to dwell on his aspirations and how his hopes faded. He prefers to focus on the things he is pre-occupied with, which include small-scale business and wheelchair basketball.

“I used to play basketball while in secondary school and college. So, when a grouping of people with spinal cord injuries invited me to try wheelchair basketball, I did not hesitate. For once, I felt I was in a group where we understood, consoled and encouraged each other. As you know, we don’t have recreation centres [in Malawi] where people with different challenges can go to and share what they are passing through,” he says.

Much as the first wheelchair basketball league, sponsored by United General Insurance, offers them a platform for interaction, there are other concerns that either scare or demoralise the players.

“The wheelchairs we use are not meant for this game as they are designed for ordinary movement usage and this affects us during games as we easily lose balance and we fall. This, somehow, affects us because we are afraid of sustaining injuries.

“Again, most of the infrastructure in the country does not have facilities that may make it easy for us to access services and, yet, we are supposed to access stadiums using good channels that accommodate wheelchairs,” he says.

All in all, Mandala believes that Wheelchair Basketball League should be reviewed to fully benefit players.

Apparently, while the nation sits idle and dozes, it took a Tanzanian national, Veronica Mughogho, for Malawi, and Blantyre in particular, to wake up from its slumber to introduce the first-ever wheelchair basketball league in the country.

But what motivated Mughogho, who works at Kachere Rehabilitation Centre?

“You will agree with me that, before I came with this idea, there was no game [in Malawi] which involved the use of wheelchair at community, district, regional as well as national levels. I had the passion to stimulate [the love for] sports among those who are physically challenged (wheelchair users).

Blantyre Wheelchair Basketball Club General Secretary Charles Nyasa says the league was growing steadily as some individuals have expressed interest in sponsoring it next season.

“From an athletic standpoint, for someone to be able to play wheelchair basketball successfully, they should have some degree of function in their arms, which, no matter how small, may be amplified and refined through rehabilitation and training.

“The league had about 37 players, who belonged to four teams— Black Spiders, Wheel Warriors, Roaring Thunders and Zigzaggers. However, with the impact that we made last year, we have registered additional players and we expect the number of teams to double or triple,” he says.

Nyasa says the players they recruit are those that have a disability or a residual impairment (that may have resulted from a neurological or any medical condition such as spinal cord injury) which makes it difficult for them to participate in ordinary basketball.

“Some may be wheelchair users, some may not, and, among them, some have had other forms of conditions (congenital) but over three-quarters have had spinal cord injuries, above half of which are as a result of road traffic accidents,” he says.

The medical practitioner at Queen Elizabeth Central Hospital described a spinal cord injury (SCI) as an injury to the major nerve fibre that is housed within the vertebral framework at the back (the backbone).

“This major nerve is responsible for transmission and coordination of neural messages between the brain and all parts of the brain, segment by segment. An injury to the cord disrupts the communication between affected body parts and the brain, which is the command centre of the body. This is what leads to paralysis of body parts in people with or with history of SCI,” Nyasa says.

He adds: “There are basically two major types of spinal cord injuries; traumatic and non-traumatic. Traumatic SCI is the one that happens as a result of a traumatic event, such as road traffic accidents and falling from height. Non-traumatic SCI is that which happens as a result of infections or other disease processes that affect the spinal cord, such as tuberculosis of the spine and transverse myelitis.

Nyasa says on whether the loss in function will be complete or partial depends upon the severity of the injury, which may range from a mild compression to a complete resection. An injury in a specific location or side of the cord, results in a specific presentation of signs and symptoms, he says.

However, Nyasa admits that the league was facing some hiccups, citing poor infrastructure and lack of equipment.

“At the moment, we do not have specialised wheelchair basketball facilities such as WC basketball courts. Also, we have been using wheelchairs that are not designed for the sport and, therefore, lack so many adaptive features and mechanisms [in terms of balance and propulsion]. We need special wheelchairs or multi-sport wheelchairs for us to move forward,” he says.

Meanwhile, Malawi Paralympics Committee president James Chiutsi, whose body is discussing with Blantyre Wheelchair Basketball Club the possibility of taking over the league, sympathised with the usage of ordinary wheelchairs during competitions.

“Of course, I understand the situation. But this is because wheelchairs designed for the sport are expensive and cost about $3,000 [about K2.2 million]. Yet, the ordinary wheelchairs cost in the ranges of between K300,000 and K500,000. It is dangerous to use ordinary wheelchairs during such games as players risk other injuries due to loss of balance,” he says.

Chiutsi says there is need for political will and corporate support to set up proper infrastructure to accommodate physically challenged athletes, including those that use wheelchairs.

“We don’t have the right infrastructure. We should not think about the playing field only but of other things such as restrooms and passages at the venue,” he says.

It is without doubt that wheelchair basketball league players, while searching for fun and interaction, are also facing clear danger.