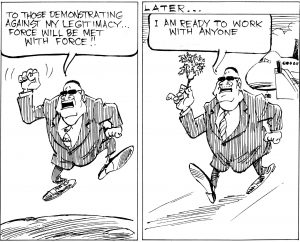 The political impasse that the country continues to experience after Malawi Electoral Commission (Mec) announced that Democratic Progressive Party’s candidate Peter Mutharika had won May 21 presidential election has brought a lot of pain to our national psyche.

No one knows what will happen tomorrow and investors too are staying away from Malawi because they cannot be assured of their property’s safety and security.

Yet, there is no disagreement which cannot be resolved if parties at variance have shown willingness at the very beginning that they want peace to reign.

In the current impasse, Mutharika—as a leader of this country, despite that his legitimacy is being challenged by Malawi Congress Party’s Lazarus Chakwera and UTM’s Saulos Chilima—should have pursued the peace path immediately after thousands of Malawians started pouring to the streets, calling for Mec Chairperson Jane Ansah to step down for leading a team that apparently mismanaged the poll.

But the President has been quiet all this time; sometimes going to the extent of threatening demonstrators that force would be met with force if they continued challenging his legitimacy through the demonstrations.

This other day, he went to town castigating opposition political party leaders for arguing that the election that renewed his mandate was fraudulent.

He even tried to augment his authority by claiming that there is nothing that can be done about his second rise because the election was free and fair and that nothing in the process favoured him.

At the 74th Session of the United Nations General Assembly that was held in New York in September, Mutharika reported that opposition party leaders were destabilising the country.

Perhaps, leaders who listened to the sentiments wondered whether the best way of dealing with such a problem would be reporting to the UN without first exploring local ways of solving the problem.

But, from all those actions, it is clear that the President has not been willing to pursue peace using all possible means.

Perhaps, that is why even after meeting some stakeholders, who wanted to see an end to the current political crisis, we have not heard anything concrete about how peace can return to Malawi.

The President has not publicly made any attempt to restore tranquillity in the country until recently, when, on his return from the Russia-Africa Summit in the Eastern European country, he called on all Malawians to come together to end the instability and rebuild the nation.

All along, the President has taken a rather confrontational approach to anything that he be believed was against his administration.

On his return from Russia, Mutharika admitted that Malawi has become a laughing stock and called on civil society organisations and the opposition to work with him and forget the past.

Well, while it still stands that such peace-seeking sentiments—if at all they are genuine—have come rather late, perhaps the President should be given the benefit of doubt on his wish.

However, it is difficult to really believe that he is willing to let peace prevail through dialogue when we have not heard anything after the ideas on his arrival from Russia.

Perhaps, because Malawians have not been to the streets for some time now, the President believes he can rest on his laurels and let providence carry away all the anger and frustration.

But, that is a dangerous way of governing a nation. Great leaders are those that rise immediately a crisis arises. Those who prevent one from occurring or recurring are even greater.

So, even if things seem to be fine now, Mutharika should not relax and expect that what he said upon his arrival from Russia was enough to bring peace back to the country.

In any case, the sentiments must be seriously followed with action and it should be the kind of action whose hypothesis clearly shows positive results will emerge.

As a starting point, has the President put in place any concrete measures of resolving the current crisis? Has he called Chakwera and or Chilima to formally present his case that he wants peace to return to Malawi?

Has he called the civil society leaders who have been organising the demonstrations to a dialogue where they can reason together for the sake of the country’s progress?

If he has not done any of these, then it may be true that his peace sentiments were just a face-saver or some public relations stunt in the midst of the chaos that has exposed weaknesses in leadership.

Mutharika himself admitted that other countries are laughing at Malawi because of the political turmoil. Perhaps, they are laughing at us because they know that the crisis would be easily resolved if our leaders were willing to pursue that path.

Now, several sectors are feeling the pinch. For instance, businesspeople are complaining that they are no longer bringing forth good returns.

In fact, even the lawlessness that is manifesting in other areas including schools, where students are vandalising property at will, might be traced to failure to deal with the initial problems.

It appears more people believe they can vent out their anger, which has been held for a long time, because others have successfully done that.

We would not be witnessing some of the chaotic scenes in the country if we had solved the crises the moment they first arose—after people began to take to the streets, protesting the results of May 21 elections.

Well, now could be too late but, perhaps, even in the current scenario, it should be better late than never.