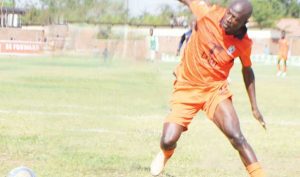 TNM Super League defending champions Be Forward Wanderers underlined their class when they cemented their chances of retaining the title after soaking Red Lions with a 4-1 drubbing at Kamuzu Stadium in Blantyre Sunday.

The win has seen Wanderers leapfrog wavering Silver Strikers on second position with 45 points from 22 games whereas the Bankers have 44 from 23 games.

Wanderers went ahead in the 10th minute after Esau Kanyenda connected home a fumbled ball originally from Isaac Kaliati.

Lions had the chance to equalise from the spot after left-back Francis Mlimbika handled in the 18-yard box.

But Wanderers in-form goalkeeper, Nenani Juwaya, yet again underlined his growing reputation when he saved the penalty kick.

The match was also full of tension with Lions resorting to physical play and some Wanderers players were at times guilty of the same offence.

Most notable was the battle between Lions’ Royal Bokosi guilty of the same offence.

Most notable was the battle between Lions’ Royal Bokosi and Mlimbika who, time and again, were being involved in physical duels.

The encouter turned out to be a 50-50 affair in the second half with Wanderers hunting for another goal as Lions also desperately searched for an equaliser.

The defending champions eventually stretched the lead to 2-0 through Peter Wadabwa .

Wanderers put the game beyond Lions’ reach with a brilliant team effort that saw Kamwendo and Kanyenda combining to set up Precious Sambani who beat Lions goalkeeper Brighton Ngwenyama on the near post in the 77th minute.

Wadabwa then claimed his brace and Wanderers’ fourth 10 minutes later.

“Our mission is to win all the remaining games so that we defend the title,” Mpingajira said.

Lions Coach Stereo Gondwe said his charges lost concentration and crumbled when it mattered most.

In other games, Civil Sporting Club and Masters Security drew 2-2 at