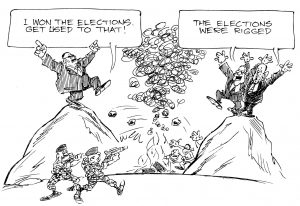 The Malawi Human Rights Commission (MHRC) said this week that so far three Malawians have died as a result of the violence in the aftermath of May 21 elections and we are counting.

MHRC Executive Secretary, David Nungu, said peace is a right and a sure precondition for the enjoyment of other rights and for sustainable development, pinpointing that Malawi is on a dangerous path.

He could not put it any better as events of this week have just proved to our political leaders that while they are busy exchanging words and trying to outdo each other in talking tough, in the process displaying their inflated egos, we are now counting dead bodies of Malawians paying the ultimate price.

They are going to their early graves on the politicians’ account.

Superintendent Usumani Imedi was most probably a family man. He was a husband, father, uncle or son to someone.

On Tuesday, he left home and bade bye to his family to go to work where he earned his living just like we all did.

He did not return to his family on Tuesday evening as those of us that also left our families did.

Superintendent Imedi was killed by an irate mob in the violent clashes between law enforcers and protesters at Lilongwe’s Msundwe Trading Centre who were not happy with President Peter Mutharika’s holding of a rally in Lilongwe because it is considered the stronghold of Malawi Congress Party (MCP).

If politicians needed proof that their actions and words are making this country a dangerous places to live in, then this is the proof that we are indeed on dangerous path that some of us have been talking about since May 21.

But Alas! They do not just get it.

As soon as Mutharika observed a two-minute silence in honour of the fallen Imedi during a rally at Kawale in Lilongwe, he went about his business as usual where he blamed everyone except himself for the death.

The President then went back to his theme that flies straight into the face of the court rule that stops citizens from commenting on matters that are before them, sarcastically laughing at others and declaring that he won the presidential election on May 21 when he knows, as a lawyer, that the same issue is in front of the Constitutional Court currently sitting in Lilongwe.

Would Mutharika have lost anything if he had cancelled the rally in honour of Imedi and use the time to strategise on how to reach out to MCP president Lazarus Chakwera and UTM leader Saulos Chilima to solve this political impasse?

But he could have not done that because he would look weak in the eyes of the opposition which he would obliterate to ashes if it was up to him.

He was bent on proving that he is President of everyone and he can hold a rally even in Lilongwe, the epicentre of the demonstrations that the Human Rights Defenders Coalition (HRDC) are organising against his government.

And here lies the crux of this matter and why poor people will continue to perish: Our politicians have big egos and they are not bothered to see poor people go to their early graves as long as they are safe in their barricaded homes with high walls and remain in power that gives them control of this country’s resources.

If Mutharika believes demonstrations are destroying Malawi and not him personally, why can he not engage with the demonstrators to find out what their grudge is, if he really cares?

What is it that he is waiting for when a death of a policeman cannot move him even to forget about his own so called win on May 21 and engage other candidates to save this country from further loss of innocent Malawians?

Every week, things are getting worse. Heavy army and police presence has become a constant feature in our cities. The President himself is heavily guarded by army tanks wherever he goes.

Does that seem normal to him? Is he going to govern by using the force of the army? Until when is this going to happen?

The signs are all there. The country is burning and the President thinks it can stop burning by simply shouting himself hoarse during rallies that he won the elections and that the other candidates are just plain jealousy.

After saying this, he goes to State House and hides from it all as the nation continues burning.

Demonstrations are continuing without any sign of abating as we saw the other week in Lilongwe where, once again, Malawians poured on the streets demanding the removal of Jane Ansah as chairperson of Malawi Electoral Commission.

The protesters continue to receive the backing of the law with the Supreme Court being firm against any attempts by government to stop them.

Independent commentators such as South African based Malawian prophet Shepherd Bushiri of the Enlightened Christian Gathering continue to ask for tangible action to stop the dangerously downward spiral of peace in the country.

Public Affairs Committee, led by Catholic Archbishop Thomas Msusa of Blantyre Archdiocese, on the other hand, continues to try to broker peace and we saw a meeting that it had with Ansah.

Yet our politicians do not see why everyone is worried. For them, life is as usual as in engaging in high-voltage rhetoric.

Anger is from all angles that include the President who continued it in Lilongwe this week from where he stopped at United Nations.

But now things have reached a head. We are counting bodies. The peace that Malawi has cherished so much for many years is in danger.

We should ask themselves what would make people leave their homes in the morning and block a busy road that connects the country to a neighbouring one by burning tyres in the middle of it?

The answer to this question will determine the level of anger that some section of the population has regarding how this country is governed.

Ignoring them by not addressing their grievances is exacerbating that anger yet at every opportunity, it is striking.

Can someone do something about it, please?