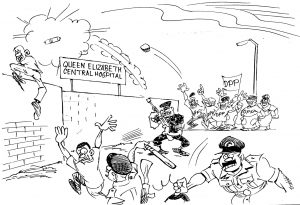 Demonstrations that Human Rights Defenders Coalition (HRDC) has been organising since May 21 elections to protest against the continued stay of Malawi Electoral Commission (Mec) Chairperson Jane Ansah in office were back on Wednesday and, this time, they were a disaster—a child died, a pregnant woman fainted and Billy Mayaya was assaulted.

Ansah this week was chairing the 21st Annual General Conference of the Electoral Commission Forum for Sadc countries at Mount Soche Hotel in Blantyre.

The demonstrators wanted to take advantage of the meeting to confront Ansah and present to her a petition that she must resign as they believe she and her commissioners mismanaged the elections.

It was not meant to be.

As soon as the protesters started off at Kamuzu Stadium Upper ground, some youths clad in Democratic Progressive Pay (DPP) attire charged at them and the two sides started exchanging stones.

No sooner had this happened than leader of HRDC demos Billy Mayaya was bloodied with a stone in the head that he had to be admitted to Queen Elizabeth Central Hospital (Queens) for treatment.

Talking of Queens itself, the Police followed up the violence caused by the DPP youth with indiscriminate tear-gassing of the protesters and all the way to the hospital, in the process, killing a child and a pregnant woman fainting.

The demos took place against a backdrop of Attorney General Kalekeni Kaphale saying they should not have taken place because they were against the spirit of what the Malawi Supreme Court of Appeal ordered to the effect that the two sides should meet and report back on what they have agreed on how to make the protests safe and not violent, something that HRDC rejected arguing the 14- day suspension in the order had elapsed.

The violence on Wednesday feeds into this narrative as the stage was already set for what eventually happened during the day.

The Police have lost the trust of a large part of the public precisely for this type of action and they do not seem to learn a thing.

What, in the name of everything that is holy, can justify tear-gassing a hospital all because you are pursuing demonstrators who you think have gone on to hide in the facility?

It is madness of the first order and somehow somewhere if it were mere regular mortals, I could suggest that their heads be examined at a mental facility.

But nay, they were men and women in uniform trained and funded to protect Malawians. That day, they turned on the same Malawians that pay taxes to fund the Police.

Later, the same DPP cadres walked in another demonstration freely escorted to Blantyre Central District Business by the same Police that was tear-gassing HRDC-organised protests.

The last time I checked, we were all equal before the law. But this is in theory and not in practice and the events on Wednesday bear full testimony to this.

Mec and Ansah have committed two classic blunders lately by putting up communication that it wants to conduct a by-election in Lilongwe South Constituency as well as host a Sadc regional meeting.

In both instances, Ansah must play a big role and some Malawians feel this is not right, hence the aborted demonstrations on Wednesday due to the violence that ensued afterwards.

Malawians have been pouring on the streets since results of May 21 elections were announced, claiming that Ansah and her team mismanaged the elections and that they must all go.

It is clear that Ansah and her commissioners have no intention of going anywhere as they have announced this week that they are now preparing for a by-election in Lilongwe South Constituency.

Malawians needed to have a say on this.

To take it personally, would it be possible for Ansah to go to the ground and conduct an election?

The country is already on fire as the constitutional court hearing of the elections court case continues in Lilongwe and it is suicidal to allow the violence that happened on Wednesday to reign over us.

The temperature is still very high as it was when these demos started, more especially when it has become abundantly clear that Ansah will not resign and that President Peter Muthraika does not want her to resign due to political reasons.

But it is also clear that the demonstrators will not relent and will use the demos to make a point that they are there and they are very much disgruntled with the state of affairs in the country.

We are in deadlock and it is hot and it is incumbent upon everyone not to push it further by engaging in the shenanigans that we saw on Wednesday. We cannot handle it.

Mec’s latest moves are misguided and they risk having very violent elections and bloodshed in Lilongwe which would not be in the interest of anyone.

Malawians have a right to comment on electoral affairs as some wanted to do at Mount Soche if it were not for the Police to behave in such a partisan manner by protecting one group of Malawians against the other.

Others such Malawi Congress Party, UTM and HRDC have advised Mec to wait for the court case in Lilongwe before making any move on any election.

After all, it is the same Mec whose initial analysis was spot on to say that the political climate was not conducive for any elections in the country.

What has changed for the  electoral body to turn around and say something different?

In the final analysis, it is very clear that Ansah will not resign and that the President does not wish to see her go, at least for now.

It is also clear that HRDC will not relent to get their voice heard as they speak to power in nationwide demonstrations that always attract thousands upon thousands of Malawians.

The result of May 21 elections is under dispute in the court.

Mec has no business to organise another contest unless this one is dealt with.

In the interim, actions such as the ones we saw on Wednesday in Blantyre, where one group was pitted against another, is playing with fire.

Things are already hot and Police and DPP cadets should not make them hotter.

No one can deal with it if it gets out of hand.

Which side of the coin is Patience Namadingo