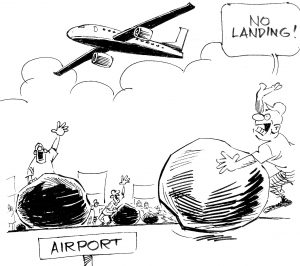 It was another 10 days of tension, terror and destruction in the country caused by the results of May 21 Tripartite Elections with more massive demonstrations, happening in Lilongwe, Blantyre and Mzuzu, against the continued stay of Jane Ansah in office.

The crowds are getting bigger and destruction of property – public and private – more potent.

So far, there is nothing to show for attempts from various quarters to bring the ‘warring’ sides together and negotiate a settlement to the matter.

The only efforts we are seeing is both sides trying to out-manoeuvre each other using legal means as exemplified by Attorney General Kalekeni Kaphale going to the High Court to obtain an injunction against the demonstrations, arguing that, while those that want to demonstrate have a right to do so, there is the economic right of those whose property is being destroyed that should also be protected, considering the anarchy that we have so far witnessed.

As the nation knows by now, High Court Judge Kenyatta Nyirenda rejected this argument saying the courts have always protected with crusading zeal the right for demonstrators to demonstrate, a view that Kaphale is appealing in the Supreme Court.

Meanwhile, the demos went ahead Tuesday last week and more are being planned; this time, to target closure of airports and borders.

Criminals continue to infiltrate them and property – public and private – such as the armoured police vehicle in Lilongwe – otherwise known as Chimbaula – and an Airtel shop continue to be destroyed.

MCP accused Democratic Progressive Party (DPP) Cadets of being responsible in a press conference in Lilongwe, a charge which DPP rejected in another press conference in the same Lilongwe saying the ruling party cannot do this because it is also a victim.

Above all this, HRDC has announced the shocker that the next round of demos meant to cause paralysis will involve country.

HRDC is obviously taking a cue from Hong Kong where protesters occupied one of the major hubs in Asia forcing cancellation of over 200 flights.

The question is: Should the government allow this to happen or it is now time President Peter Mutharika bit the bullet and let Ansah go?

As Nyirenda observed, courts have hitherto always protected the right of demonstrators to protest freely because it is a constitutional right.

Courts do this for the simple reason that they know politicians that, once you give them a yard in the name of protecting economic rights, they will take a kilometre and start using the leeway given by the court to abuse and try to stop the right of people to protest.

They will do this not for the sake of the nation but essentially to achieve their own selfish motives meant to abuse people and promote autocratic rule.

Yet, the attendant destruction that has accompanied demos that have so far been allowed by courts cannot go on because, in some cases, they are ruining innocent Malawians not even government.

As a nation, we are swallowing more than we can chew and, make no mistake, our economy is in a precarious position to take this heavy knock that we must forget the growth rates that former Finance minister Goodall Gondwe pontificated about when he was presenting the national budget in March last year.

In the name of nation-building, those organising the demos must not continue to ignore what they are causing on the ground but must take a hard look at them in the wake of anarchy it is causing.

But from the look of things, there is no light at the end of the tunnel as this tension we are seeing will continue for HRDC leaders are now going for the jugular vein.

The airports and borders are simply off limits and should HRDC insist to go there, probably it is time Mutharika thought twice about Ansah and let her go.

This country cannot afford closure of the airports even for a day, especially when it is just few airlines flying into the country. What message would that send to the world? That we have given up on ourselves and on the verge of becoming a failed and lawless State? Should we allow that all this should happen because of one person?

The biggest disappointment, therefore, is that government has responded to all this tension and anarchy through issuance of press releases and press conferences explaining this and that instead of engaging HRDC to stop the demos that are paralysing the nation.

Where others have called for mediation, there is a lukewarm response from government.

On the substantive matter about the demos, it is now clear that government does not want Ansah to go anywhere for political reasons known to itself.

Probably, the thinking in government is that throwing Ansah to the sharks is tantamount to accepting the challenge against the elections and diluting its own victory, which the Malawi Electoral Commission chairperson announced to the country after the polls.

But that said, does this mean the DPP establishment thinks Ansah can manage to preside over another round of elections in future when both MCP and UTM have said they would not participate in such polls?

It does not just make sense and the lethargy is causing tension and ripping the country apart.

In the final analysis, protests organisers must not ignore that some Malawians are being ruined economically although they are constitutionally guaranteed to protest.

DPP establishment must wake up and show the nation it is in charge by dealing with the Ansah. This nation cannot afford paralysis that may be caused by closure of airports and borders.

It is time for the Mutharika administration to think through this issue and, for once, behave like a responsible government.

Empowered to inspire others