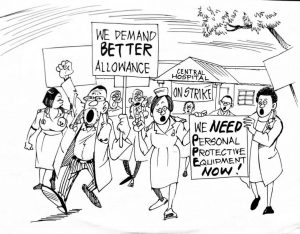 As the novel coronavirus raged through Asia, Europe and America, it became clear that no territory would be spared. Advanced healthcare systems were being knocked to their knees and lessons poured for nations not yet hit by the virus on how they could respond to it.

Medical workers were dying in Italy and other badly hit nations and the message that was being sent across was as plain as pikestaff: the virus was no respecter of someone’s social standing or profession. It still is.

So, other countries in Africa— that paid sufficient attention to the free solid warnings from the East and the West—immediately put in place strong measures of containing the spread of the pandemic which has so far infected over 2.6 million people out of whom at least 184,000 have died while close to 850,000 have recovered.

In fact, by January this year, it had already become obvious that Covid-19 was not relenting and the World Health Organisation’s declaration last month that the virus was now a pandemic should have prodded us into serious action.

The rapid escalation of the virus clearly unsettled those that were willing to seriously contain it. It appears we were and still are not among them.

As a matter of fact, why should we not pay enough attention to healthcare workers’ needs when we know that they are the frontline champions of containing the virus? They are the ones who handle patients and they cannot comfortably do their work if they are not properly protected.

It is strange that the traditional Personal Protective Equipment which medical workers need when dealing with contagious diseases has taken forever to be made available to them. What the medical workers have been asking for is something they need; it is not some luxurious items which they can do without.

Elsewhere, governments moved in quickly to ensure everything that medical workers would require when handling Covid-19 patients was available. They took advantage of the crisis in other parts of the world to gauge what they would need in likely events that their countries too registered cases.

We did not. It was as if we had all the confidence that the virus would never get here. But now it is here and we are groping  for solutions when we had all the time to prepare.

The novel coronavirus has exposed perhaps what has always been the truth about how Malawi responds to crises. It appears we are never serious about important things and have that business-as-usual approach even when situations demand that we go beyond the normal ways of doing things.

Our healthcare workers require the best care this time. We cannot hide behind the argument that this is an emergency because, in essence, we were forewarned about its coming. Perhaps it was an emergency in other countries such as Italy and the United States but not in Malawi.

In fact, when President Peter Mutharika was declaring Covid-19 a state of national disaster, Malawi had not yet registered any case. The declaration was seen as a deliberate act of preventing the spread of the contagion and one that would create space for pooling resources for fighting the virus in case it came to Malawi.

We even have a preparedness and response plan in place but it seems even through this plan, healthcare workers are not being prioritised. No one can blame them for demanding that their risk allowances should be adjusted upwards because we all know that they are dealing with a very contagious disease.

Of course, they are not putting a price on their lives but for their sacrifice, there should be some motivation. In fact, all along, the healthcare workers have been pushing for an increase in the risk allowances because in a hospital setting, there always is that threat of contracting various diseases.

It is ridiculous that we expect that K1,800 could be enough to ‘offset’ the risk that healthcare workers are exposed to when they handle patients with different ailments.

Perhaps, the Covid-19 issue has just reminded us about how much we ignore critical personnel in the health of our lives. We cannot and should never downplay the demands of medical workers if we are serious about fighting the virus and other diseases that besiege the nation.

Now, some healthcare workers are still not in agreement with government’s remedies which include an increase in their risk allowances. They are reminding the government that limiting the increase to the Covid-19 period implies they do not face other risks when handling patients.

Well, these are issues which must be quickly and soberly addressed because Malawians in some parts of the country continue feeling the brunt of the medical workers’ strike.

What happened recently at Queen Elizabeth Central Hospital, where medical staff downed tools and refused to accept new admissions could have been avoided if authorities had paid attention to the medical workers’ demands in time.

This is a big hospital which should not have gone through that shameful experience. But it happened because our attention on Covid-19 seems to be paid elsewhere.

Let us learn important lessons from how other countries are treating their healthcare workers in this pandemic. Of course, there are others who are taking advantage of the crisis, mostly politicians, to fleece taxpayers of money that is being channelled to particular interventions.

For once, we need to put our interests aside and address this scourge with full force.

No excuse is enough armour to stop a raging contagion that does not have any known cure so far.