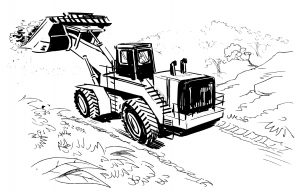 Suddenly, we find ourselves again on the countdown to presidential elections and all things constant, we should be just three days away from casting that decisive ballot. It is a pity that we have found ourselves on this journey again after everyone thought that the election matter was done and dusted with on May 21 last year; but that is a story for another day.

Let us not cheat ourselves, ladies and gentlemen; Malawi is and has been at a crossroads for quite too long and the only way we can fix that is by ensuring that sanity prevails during that all important election next week. What this country needs is a decisive and pragmatic leader.

This reminds me! This other day, I had decided to run a quick errand for my sister who was very pre-occupied with work, well, not an errand per say because It involved picking up my dear niece Asante from school. Quick-witted and humorous as ever, the little girl posed a rhetorical question pertaining to her mum’s Nissan March car I was using.

“Uncle Steve, do you know what Galagaza is?”

“It’s this car…Daddy says Mum’s car is a Galagaza because it is so powerful that it can take you anywhere,” she boasted. Just between you and me; Galagaza is that heavy goods carrier Scania vehicle that can tackle any given terrain at any given time.

I admired the level of enthusiasm that the little girl had in the tiny but ‘powerful’ vehicle. This is the sort of optimism and confidence that every Malawian needs to exude as we go to the ballot, come June 23, to choose a President. We certainly need to choose a leader who is a workhorse like the Galagaza which fascinates my little niece.

Malawi needs a President that will come down hard on corruption. No one should be denied an opportunity to get a job on the basis of the region they come from or a tribe they belong to. It is time jobs are landed on competitive basis and not being carelessly handed out to non-deserving and underqualified party masquerades. There; I said it…there is no need for our innocent youths to be idling away or having to battle for menial jobs and yet they have all the right qualifications and skills to wine and dine at the top but are being prevented by the ‘wathu’ or ‘wakwathu’ syndrome.

This country needs a ‘Galagaza’ that will level the business playing field so that both local and international merchants get to have an equal share of the cake. Business contracts should not be restricted to kinsmen. We need to have a President whose administration will inject life, not just in the private sector, but the economy as a whole; the Purchasing Power Parity of our Malawi Kwacha should be high up there so that when one decides to spend, say, on groceries, he or she should get real value for money.

The ‘Galagaza’ we are choosing on June 23, ladies and gentlemen, needs to bear in mind that politics of appeasement; where party hoodlums and henchmen, get to manipulate their way into parastatal boards and government ministries, departments, or indeed on the President’s foreign trips where they have little or no business to be there, will not be entertained.

At a time when tempers in the country have, for close to a year, been boiling hot, it goes without saying that the President to be elected will need to deliberately push a unifying agenda because the political conflicts and violence witnessed in the land have certainly driven a wedge among the population.

It is disheartening to note that while government is essentially made up of three arms; the Executive, Judiciary and Parliament (with the media taking up the unofficial role of the fourth estate), these three arms have of late not been talking the same language, a situation that has been characterised by continued antagonism between these key agencies. It is my prayer that the person elected on June 23 will see to it that there should be harmony between the three arms of government, with mutual respect and most importantly, great respect for the laws of the land that govern their functions. We should not be seeing what people witnessed this past week, whereby the Judiciary and the Executive took each other head on, forcing the country’s lawyers to join in and stage protests in solidarity with their colleagues at the Judiciary for what they described as the Executive’s continued interference in the affairs of the Judiciary.

So, mister new President (whether it will be the incumbent or a new face altogether), there will certainly be no time for honeymoon for you. We expect you to get dirty at the soonest like a Galagaza.

So paying tax was only for us

The cloths of heaven