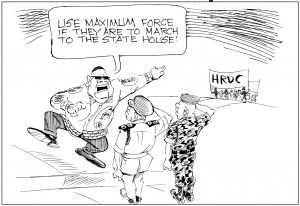 Political temperature sharply rose this week, starting on Sunday when President Peter Mutharika spit fire during a DPP/ UDF alliance rally in Blantyre saying he has had more than enough with his political detractors.

Mutharika’s ire was specifically directed at Human Rights Defenders Coalition (HRDC) leaders after being incensed by Timothy Mtambo and Gift Trapence’s stance that they will seal State residences on March 25 if the President does not sign the three electoral bills and fire Malawi Electoral Commission (Mec) commissioners as recommended by Public Appointments Committee of Parliament.

As Commander-in-Chief, Mutharika specifically ordered Army Commander General Vincent Nundwe and Acting Inspector General Duncan Mwapasa to use maximum force on Mtambo and Trapence if they dare carry out their threat of marching on the State residences.

In full compliance with the presidential order, made on a political podium, Trapence and MacDonald Sembereka were arrested a few hours later in the evening on Sunday and a warrant of arrest was issued for Mtambo who gave himself up on Tuesday after police failed to trace his whereabouts.

The President was to repeat the same anger in the Shire Valley when he opened an agriculture transformational project, this time targeting even Amnesty International which was among the many organisations that criticised his government for arresting the human rights activists after the podium outbursts.

So, is the mighty APM finally cracking and feeling the heat after the sustained pressure of HRDC in league with opposition?

The answer is in affirmative. The President still believes he won last year’s presidential election despite the glaring irregularities and the ruling by the Constitutional Court that he was not duly elected was one hard slap across his face.

The ruling shocked Mutharika’s system and the President’s recent outbursts is a sign that he is feeling the heat from the sustained campaign that HRDC has conducted against his government since last year’s election and even before which culminated into the court battle that MCP president Lazarus Chakwera and UTM leader Saulos Chilima won.

But he must be careful because, after the State House, there is still tomorrow.

Unleashing the army and police on unarmed citizens that are HRDC leaders with the attendant instructions to use maximum force, all because of press conference threats to seal State residence, is patently going too far.

So what was the President saying? That the army and police who the State has trained and armed to kill must annihilate Mtambo and Trapence all because of their verbal threats?

Look, this country already has enough unexplained deaths in the late Issa Njaunju and Robert Chasowa who both died mysteriously under the DPP government.

The nation cannot afford such further disappearances. A whole president should not be involved in threats that undermine the safety of unarmed citizens no matter their orientation or line of work should be.

It does not even help matters that the President’s speech followed other equally explosive speeches by some DPP characters such as secretary general Grezeldar Jeffrey and regional governor Charles Mchacha who openly suggested that HRDC leaders risked death if they carried out their threat to march on State residences.

As citizens, we are justified to want to differentiate the speech delivered by a regional governor and one by the State President.

I am afraid to say, on Sunday, Malawians who were following the rally at Mjamba had difficulties in knowing who was speaking between the President, Mchacha and Jeffrey who proudly likened herself to a hard-hearted unforgiving witch, her Chichewa words which I have simply translated.

It is not a surprise that a few hours later, the threats and speeches were followed by arrests of Trapence and Sembeleka and a warrant of arrest issued for Mtambo.

The police had no chance to exercise independence and investigation as the orders came from the individual occupying the highest office on the land.

There is an argument that Mtambo and Trapence might have gone too far in saying they will march on the State residences and seal them.

Those that advance this argument point out that the two firebrands are capable of attempting to seal the State residence as they did with Mec offices last time they were on the streets by even dramatising the whole thing by openly buying locks and chains at a market in Lilongwe a day before the act.

All this is meant to justify the President’s outbursts and the subsequent arrest of the two.

But State power should not be used to intimidate citizens for their utterance.

Has the DPP establishment conveniently forgotten that there is freedom of speech in this country guaranteed by the Constitution?

Are there political strategists in the DPP establishment who should have seen the folly of effecting these arrests whose net effect has been to create heroes out of Mtambo and Trapence and angering Malawians who abhor the use of State power to fight purely petty and partisan political battles?

The result was that Lilongwe exploded and the streets were filled up as Mtambo handed himself to police something that should be avoided at this crucial time when our institutions are busy sorting the mess that was last year’s election.

For over a year now, the country has been more or less on a standstill and you would think the leaders on both sides of the political divide would see the need to lower the political temperatures as the nation charters its way out of this crisis.

This week of outbursts, arrests and protests should have been avoided at all cost.