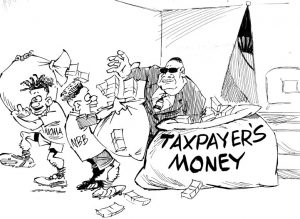 Until now, I do not know what has gone into the heads of those that are close to President Peter Mutharika for them to  fail to advise him that the idea to spend K1.6 billion of public money on two private enterprises is not just a bad one but also unheard of and defies all economic and priorities logic.

It seems to me none among the whole lot of people close to the President is brave and honest enough to point out how bad his idea of building two stadiums for two private teams is that, as we speak, Minister of Finance Joseph Mwanamveka has put in front of Parliament a budget that contains a proposal to give Nyasa Big Bullets and Be  Forward Wanderers, football clubs a whopping K1.6 billion, I suppose, as start-up to the projects.

Mwanamvekha will follow this up with more splashing from the public purse in the subsequent budgets if the idea is just to build real stadiums and not just play grounds.

Malawians know what a stadium is and what it costs and K1. 6 billion is not enough. But I digress. The issue here is a whole system in government attempting to do something that is patently wrong and illegal using public money to fund a private enterprise just because the President made the promise to the two clubs at the height of the campaign last year.

The President certainly had a right to campaign the way he wanted and to shout his lungs out for votes to any segment of the voters as he deemed fit.

Clearly, on this one, he was courting the supporters of Nyasa Big Bullets and Be Forward Wanderers, two of the most successful football clubs in the country with massive support not only in the populous towns of Blantyre such as Ndirande or Bangwe, where the two teams come from, but throughout the country including the deepest of the rural areas in far-flung districts such as Chitipa.

You will find Wanderers and Bullets supporters everywhere in the country.

Mutharika was simply looking for votes when he made the promise to build stadia for the two teams at the heat of the campaign this year. It is right that the President today is fulfilling that promise but doing it wrongly.

It is wrong not just on the legal question but also on the moral one. Here is a president who wants to take tax kwacha paid into the national kitty by poor people and splash it on clubs owned by rich private companies—what is that?

It is very simple. The President should identify funds for the two teams from private sources if he wants to help them and leave our tax kwacha alone.

Without which Mutharika risks going down in history as the President who could not prioritise simple things.

This is an emotional populist decision crafted with a view to make people happy with entertainment, yet they have no drugs at hospitals leading to deaths from curable diseases and their children are learning under trees even in this day and age.

What is this obsession with stadiums by this government? Are stadiums the most pressing thing Malawians lack today? What do these stadiums bring to national development? We have Bingu National Stadium which the Chinese built for us at a huge national cost through the debt we have incurred with our Oriental friends, yet we cannot take care of it and put it to productive use.

As I am writing, the facility is rotting away with no strategic plan in place not only to make it selfsufficient but to also turn it into a money-spinner. We have no clue on how to do it.

No, Mr President there is a better way to spend K1.6 billion for the sake of the long-suffering Malawians. Yours is simply a bad idea.

No wonder, the matter has attracted a huge debate, with Human Rights Defenders Coalition (HRDC) almost making it into a demonstrations issue. Should the issue really escalate to that level where we should be arguing? Where in the world do you see government pouring money into private enterprises as if they were in a crisis that could affect whole population?

Is Nyasa Manufacturing Company, a private entity engaging in tobacco products and that owns Bullets, in crisis that can affect us all? What about Be Forward Wanderers? Are they in crisis too? In the end, the two football clubs should be careful with what they wish for.

You do not touch public money for nothing when you are a private company and get away with it. Press Corporation Limited was all along associated with the Malawi Congress Party (MCP)’s 31- year rule and was poised to remain so if it were not for the successful attempts by the succeeding United Democratic Front (UDF) government which sought to reconstruct the conglomerate, arguing it benefitted from the State in its history.

The UDF government was able to demonstrate that Press used the Sovereign Guarantee to obtain a loan from the World Bank.

The conglomerate paid back the money in full from business, yet the fact that it was the State that guaranteed it strengthened the argument that it was a public company and the court accepted that argument.

Today, Bullets and their owners, Nyasa Manufacturing Company and their cousin, Wanderers, can be happy that they have the favour of those in power that they are willing to give them billions of State money.

They can walk tall that things are going well for them and call those who are opposing this potently wrong move bad names. But there is always tomorrow when they will be held to account for those actions today and it can turn nasty and brutal.

In the final analysis, I hop common sense will prevail well above senselessness in the use of public money.

Those that surround the President should do the needful and whisper into his ears that giving public money to private enterprises to acquire an asset is a horrible idea.