What seemed to be an initiative to eradicate poverty for 48-year-old Ephrina Msukwa of Mwandambo Village in the area of Senior Chief Mwakaboko in Karonga District has turned out to be a permanent cobweb of poverty for her.

In that cobweb, Msukwa remains trapped as she struggles to look after her 21-year-old daughter.

Msukwa entered into an agreement with a prospective Tanzanian employer in 2015 when her daughter, Iness Mtambo, was 15 years old and doing standard five at Ngisi Primary School.

She received an upfront payment of Tsh30000, which at the current exchange rate is equivalent to K12,000. It was a deal that saw her daughter off to Tanzania to work.

However, barely two months after Iness had left, something went wrong. The deal suffered a huge blow as Iness came back home due to a mental health ailment.

The development devastated her mother’s dream, ended up rendering the family destitute and turned her into a laughing stock in the whole community.

Msukwa is now living a regretful life because at that time, she failed to take heed of pieces of advice from community leaders who vehemently spoke against the idea of trafficking the girl to Tanzania for labour.

“I am now regretting for the mistake I made. I thought I would be getting monthly income from my daughter which could transform the family’s socio economic status. Now I am a slave in a free world,” Msukwa regretfully recalls.

Had Msukwa taken heed of the advice of the community leaders, probably Iness would be in school.

“Life is hard. Her ailment requires my attention. When she is tormented, she can wreak havoc and do anything harmful so, I have to be around. In the process, I have no time for me to do farming or any other business,” she says.

To turn around her self-inflicted problems, she says, she needs both financial and material help.

“All I need is help. Be it capital for business, a decent house or my daughter’s medical attention so that she should recover from her mental health problems,” she says.

Being trafficked to work in Tanzania is one of the problems girls in the area face — against their dream to get education .

In addition, Ngana and Ngisi area is hard-to- reach, hilly and bumpy and does not have a secondary school.

Here, it is common practice for girls to drop out of school and enter into early marriages or trek to Tanzania for labour to avoid walking a distance of about 24-kilometres to the only secondary school in the area, Iponga.

Poverty, coupled with harmful cultural practices such as chithola minga and lobola, make parents look at girls as pure gold they quickly accept offers that come their way regardless of the girl’s age.

These revelations were made recently at group focus discussion and gender laws training which the Evangelical Association of Malawi (EAM) under its Timazge Khaza project conducted in the area.

According to Ngisi Primary School mother group chairperson Ireen Mbotwa, the practice of sending girls out for labour or marrying them off is deeply rooted such that parents become defensive and at times use unpalatable words to anyone standing in their way.

“We have been facing threats from parents who marry off their girls for money or traffick them to Tanzania. However, slowly, things are changing for the better. Thanks to Timazge Khaza project that was introduced by the EAM last year,” Mbotwa says.

She says with various interventions, community leaders have realised that cultural practices such as kupimbira, chithola minga and chihalo are a danger to society due to the prevailing HIV/Aids.

“Right now there are by-laws that we use to fine at least K50, 000 everyone who marries off under-aged girls or forcibly send them to Tanzania.

“We have also established a ‘Bring Back to School Campaign’ for all girls who were married off and at least nine girls are back to Ngisi school,” she says.

To reinforce these by-laws, it took Senior Group Village Headman Mwandambo and his fellow traditional leaders time to reflect on the rising cases of early marriages in his area which he said alarmingly rose during the Covid-19 school break.

“During the Covid-19 school break, the figures were quite scary. It is during that time when EAM engaged community leaders such as mother groups, child protection committee members, women groups, community victim support units and youths on the need to fight gender-based violence.

“And recently, we were engaged in gender-related laws trainings to equip us with skills on how we can report GBV cases to relevant authorities, offences and sentences for various forms of GBV to safeguard the right of a women and girls,” he says.

Mwandambo Child Protection Worker Luka Mtambo says between 2014 and 2021, only four underaged girls were married off while five were trafficked to Tanzania, thanks to the community by-laws coupled and the unwavering support from Timazge Khaza project.

“EAM’s sensitisation and awareness campaigns have played a critical role. The lobola price tag of K100, 000 which parents used to charge for their underaged girls used to deafen their ears that they could not take heed of any advice.

“However, this is slowly dying down as the reinforcement of the by-laws and intensification of community watchdogs is playing a role”.

EAM District Project Coordinator Dumisani Nungu says as a faith-based institution, the focus is to reach out to the under-privileged and impact their lives positively regardless of gender, ethnicity and religion.

“We are glad that people are able to report cases of GBV. We are happy that community by-laws have been formulated to help eradicate harmful cultural practices that work to the disadvantage of girls and women.

“We will engage an extra gear until we make this place a better place to live in,” he says.

Nungu further says that his institution will lobby the District Social Welfare Office for Rebecca to get the much-needed psycho-social support and rehabilitation.

But he also pleads with government to give people of Ngana and Ngisi social amenities such a secondary school and road network.

“Some of these GBV cases are fueled by lack of commitment from elected and duty bearers. Let these people be given a secondary school; let them have a good road network and a tower to enhance communication,” he says.

Karonga North Constituency lawmaker Mungasulwa Mwambande says for increased access to education by girls in the area, he banks on the 250 secondary schools which government plans to construct throughout the country.

Karonga District Director of Planning and Development David Gondwe says the district’s education plans highlighted the need to have a secondary school in the area to ease the challenges which girls face.

He says: “We have plans to take social services including secondary schools closer to people. However, much as we would want to have secondary schools in many sites, the challenge that remains is that of financial constraints.”

One good turn deserves another 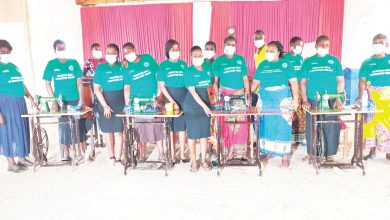 Wives suffer as husbands get stuck in South Africa