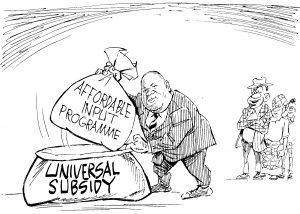 Finance Minister Felix Mlusu on Friday last week was in his element as he presented a K2.190 trillion 2020/21 National Budget that reflected someone walking on a delicate tightrope of a shrinking resource envelope amid growing expectations from the citizenry as a result of the Tonse Alliance government promises to the electorate.

Themed Living the Promise, the budget the soft spoken Mlusu delivered to a country pregnant with unrealistic expectations on Friday, was clearly meant to make sure that the debt burdened Malawi cuts her cloth according to her size to cushion the economy from plunging into a debt distress situation.

You could choose to also call the budget ambitious in its aims and here is why.

The Tonse Alliance campaigned on an array of promises, some of them outright unrealistic.

And so, despite the precarious fiscal position caused by the unstable political climate of the past 15 months and the dawn of Covid-19 pandemic, Mlusu delivered a budget that managed to speak to some of the Tonse Alliance key promises such as the famous three meals a day and the K4, 495 per bag Affordable Input Programme fertilizer.

Although targeting 4.2 million beneficiaries and more than tripling the number, beneficiaries the DPP government used to target, this is not exactly the fertiliser subsidy that the Tonse Alliance promised during the campaign.

They promised a universal subsidy.

But the truth of the matter is that economic reality has finally sank for the Dr Lazarus Chakwera administration to know that it would be economic suicide to facilitate that every Malawian who so desires can buy fertiliser at K4,495 per bag.

The reason is so simple We cannot afford it without compromising funding to other equally important public matters such as health, education, infrastructure development and the list is endless.

I also bet that if the universal fertiliser subsidy were to happen, all the neighbouring countries would be flocking here to haul out the cheap stuff to their own countries.

Simply put, reality had to sink in for this administration.

This is more or less the same with similar outlandish but popular promises such as free connectivity to electricity or water grids.

The budget statement did not have specific answers to such promises, preferring instead to say government is waiting for reforms to take effect in bodies such as Escom and water boards before committing to the fulfilment of the promises.

For the rest of it, it is business as usual, with the budget giving priority to the education sector, which has been given a lion’s share of K384.5 billion to cater for wages and salaries of teachers; operations for primary and secondary schools; development projects; and public universities.

To me, the highlight is that the governance institutions such as the Anti-Corruption Bureau, Office of the Ombudsman, Law Commission and the Malawi Human Rights Commission have been given a huge boost as it will help in the fight against corruption that has brought this country down to its knees for the past six years.

Just look at the kind of arrests the Police and other law enforcing agencies are doing, including petty thefts even by former ministers and top officials.

How bad can it get! How different is this from petty criminals that steal chickens!

We need cleansing as a nation and it is good that public institutions that are mandated by law to cleanse the nation of both petty thieves who stole government property as well as those behind white collar crimes such as fraud and corruption have been given a new push in the budget.

A good budget must also put money into people’s pockets apart from dealing with the bigger heavy stuff such as the macroeconomic stability that we, the Povos and lesser mortals, cannot understand.

It was soothing, therefore, that the first Tonse Alliance budget has fulfilled its promise to broaden the tax free bracket on Pay As You Earn by raising it from K45,000 to K100,000.

Equally enchanting is the rise of the Constituency Development Fund (CDF) as the annual allocation has jumped from K30 million to K40 million which, if not stolen at district councils, will see development trickling down to the grassroots even in the rural areas.

All in all, this is a realistic budget that attempts to be ambitious in a difficult operating environment.

The proof of the pudding is in the eating and implementation is what will matter in our lives and not the colourful language Mlusu employed in delivering it to our MPs that Friday morning in Parliament in Lilongwe.

It will not be a walk in the park as the business environment is bad for resource mobilisation and hence debt accumulation is expected, including domestically.

There will be an attempt to borrow both on the international market and domestic scene.

The opposition in Parliament must do its job and the knives are already out to pounce on Tonse Alliance’s promises such as free electricity and water connection, no universal fertilizer programme and no reduced passport fees.

That is the beauty of democracy that we must all enjoy while it lasts as we did last week when President Lazarus Chakwera appeared before Parliament where he mercilessly run over Leader of Opposition Kondwani Nankhumwa on a number of issues including contracts for Malawi Electoral Commission (Mec) commissioners and the state of Tonse Alliance.

When all is said and done, Mlusu simply had to present a realistic and sensible budget.

Dealing with scarcity of paint