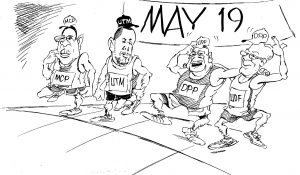 After the government side in Parliament fought tooth and nail in their attempt to thwart the passing of electoral bills meant to clear the path towards May 19 2020 presidential election, the House finally managed to do the needful by amending Parliamentary and Presidential Act as well as the Electoral Commission Act.

Without wanting to pick a particular side, I think it was clear for all to see that Democratic Progressive Party (DPP) legislators were reluctant to deliberate the contents of ‘those’ crucial bills; the Electoral Commission Amendment Bill and Parliamentary and Presidential Amendment Bill. Most of them had argued that they needed to go back and consult the electorate who gave them the mandate to be in the House but this, to me, was just a smokescreen that did not pay any dividends. Why is it that these legislators found it convenient to go back and consult their constituents on this issue and yet, on all other matters, they just make decisions in a spur of the moment, without due regard to the ones who voted them into office? And in any case, they had a weekend in between the passing of the amended bills; surely, if they were serious they would have got in touch with their constituents.

Was it by sheer coincidence that when the DPP MPs decided to boycott the afternoon session of Parliament on Friday last week, somebody dangled a chain on the electricity wires that help transmit power to Parliament? By the way, I hope police and Electricity Supply Corporation of Malawi (Escom) officials have finalised their investigations as to who exactly dared to do that unthinkable act, which plunged our Parliament into darkness. Somebody needs to be held accountable for disturbing parliamentary deliberations at such a crucial moment.

The ball is now solely in President Peter Mutharika’s court, since, after parliamentarians have done their part, the President must also do his bit by either giving consent or declining to append his signature. So far, the tenant at House Number One has been dropping hints that he is game in as far as the country holding fresh presidential polls is concerned. Why am I saying so? In his initial reaction to the Constitutional Court ruling, Mutharika had made it clear that he would not stand in the way of a fresh election but would appeal only those areas where he feels the court did not treat his case fairly.

I do not think that it will go as far as having the whole Human Rights Defenders Coalition (HRDC) mobilise a five million-man march to State House just so the President can append his signature to the electoral reform bills, as envisaged by one Timothy Mtambo. Mutharika, being a man of law, will just have to do exactly what Malawians would want him to do; which is to endorse those bills so that the country moves forward.

Another indication which most people, just like me, are reading much into that shows Mutharika’s willingness to assent to the bills is the recently unveiled alliance between DPP and Atupele Muluzi-led United Democratic Front (UDF). Now, we all knew that these two parties have always been in cohorts despite failing to come out with a clear partnership blueprint in the aftermath of the May 2014 election. Not this time! The two sides decided to have a flashy event right within the confines of State House (or was that a State function?) to announce their ‘re-union’… why did they not take it to Masintha or whatever ground? In the words of DPP Secretary General Grezelder Jeffrey, the two sides are yet to determine if their alliance should culminate into a coalition in the forthcoming presidential polls where they can field one candidate. Anyway, that is beside the point. What that union symbolises is the readiness of Mutharika and DPP to square off with opponents under the new interpretation of 50+1 system of choosing a winner, and not the first-past-the-post system that we have used as a country over the years.

And so, if everything is to work out, then the President must assent to that amended PPE Act so that we can indeed have the highly anticipated polls, come May 19 this year.

While we are on the subject of parties forming alliances, all eyes are now fixated on the MALAWI Congress Party and UTM to see how they will manouvre; will they also seek alliance partners or will they opt to throw caution to the wind and go it alone during the presidential polls? Whatever it is they decide to do, but for the time being, they can borrow a cue from Mutharika and ‘the young’ Muluzi by forging partnerships (if they will take that route) well ahead of time.

Good luck to all of you and as they say; when the going gets tough, the tough get going.