The world is facing a global food crisis like none other, with food prices at historic highs, supply chains disrupted by war and disease, and climate change threatening harvests in virtually all geographies.

Global food insecurity is rising so rapidly that hunger pushes one child per minute into severe malnutrition and in 2021, up to 828 million people were affected by hunger.

Sixty percent of global calories come from the big three grains (wheat, maize and rice) in refined form. The processing of these grains reduces their volume by 20 to 30 percent and removes even more of their nutritional value.

Diets dominated by these refined grains, sugar and ultra-processed foods have become the leading cause of preventable death in the world, linked to rising rates of obesity, diabetes, heart disease, stroke and some types of cancer.

In nearly every country, these unhealthy foods are ubiquitous and cheap.

A simple shift from refined grains to fortified whole grains would not only produce more nutritious food for billions of people – without increasing production costs – but also help towards the reduction of malnutrition and hunger.

This shift would save many cash-strapped governments billions of dollars in food import costs and agricultural subsidies, without requiring a single additional acre of farmland or one more ounce of fertiliser.

Concerns have been raised about the shelf life of whole grain products, their costs as well as consumer acceptance.

Advances in food processing technology make it possible for many whole grain foods to have a shelf life of six months and longer and it has been demonstrated that the production of whole grain in bulk costs less than that of refined grain.

But despite these obvious benefits, food production remains centred on refined grains.

In Rwanda, there has been an increased adoption of whole grain in school meals. In trials undertaken in 18 public schools where 13,700 children were served whole grains in the daily corn meal served for lunch, many children reported that it made them feel fuller and more energetic.

Over 90 percent of children in grade six preferred the whole grain meal when they were sensitised to its benefits.

In Denmark, consumer education, including through packaging logo, increased consumption of whole grains by 75 percent between 2007 and 2014.

With the world facing an escalating food and hunger crisis, action needs to be taken that would save lives and begin to steer food systems towards healthier outcomes. Today, a lot more is known about the nutritional value of whole grains and the ramifications of refinement.

Three key actions could support the transition from refined to whole grains within a relatively short time:

The shift by institutional purchasers of food to buying whole grain is a powerful means of increasing demand.

African governments feed an estimated 10 to 30 percent of their populations through safety net programmes, school feeding programmes (which alone reach more than 60 million children on the continent), hospitals, prisons and other public institutions.

A shift from refined to whole grain purchasing within these institutions could have significant impact and influence broader change across the food system. In addition, shifting government subsidies for refined grains to whole grains would also help influence the market.

And that is just for starters. It is also richer in iron, zinc and vitamin E. With added micronutrient fortification, whole grains could help overcome devastating malnutrition, strengthening bodies and minds.

Modest investments are needed in the milling sector to make the switch from refined to whole grain. Millers require affordable financing as well as partners and governments, development organisations and private food companies should be at the forefront to drive these investments.

In Rwanda, mid-sized and small milling operations have started to make this switch based on initial investments in the tens of thousands of dollars, and expect to see these investments recouped and turned into a profit within a few years.

The global food crisis and its underlying causes, which are deep and systemic, would not be solved by the switch from refined to fortified whole grains.

Bigger transformations are needed and these include enabling the development of diverse, equitable, and regenerative food systems that not only nourish people but also the natural ecosystems essential to growing good food.

However, shifting to whole grains is an important and highly feasible step, even as we come to grips with the profound dysfunctions of the broader food system.

Its benefits would also begin immediately and would only grow over time. A whole grain transition today will take us one step closer to a world that provides good food for all. 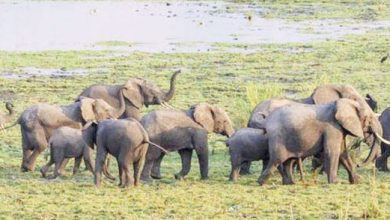 When animals and humans clash