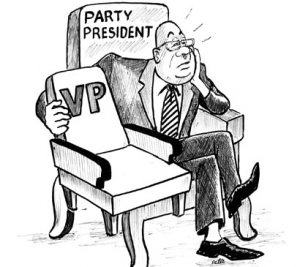 The country has been eager for some political action in the past 10 days and at tenterhooks to learn who the presidential candidates – especially those that have a realistic chance to have a real go at State House – have named as their running mates to partner them on their tickets.

With two days to go before the Malawi Electoral Commission (Mec) starts to receive nomination papers from presidential candidates, there is tension and reported divisions in some major political parties as regards the choice of running mates.

The political season is truly upon us.

Only MCP president Lazarus Chakwera had named his running mate, Sidik Mia, well in advance of the nominations process while the ruling DPP, UTM, PP and UDF somehow dilly-dallied and tongues have wagged, causing tension in these political parties.

At some point, reports from sources that have corroborated each other claimed that President Peter Mutharika had settled for UDF’s Atupele Muluzi, something that reportedly caused tension in the party as others felt that was political suicide, arguing this is the last term of Mutharika and that the party cannot afford to have a running mate from another party.

Officially, the party’s spokesman Nicholas Dausi trashed such reports saying choosing a running mate is the prerogative of Mutharika and it is only him in the party who can know such things.

As regards UTM, everything has been kept under wraps with party spokesperson Joseph Chidanti Malunga insisting that the party’s convention empowered their president, Saulos Chilima, to choose the running mate who will eventually become the party’s vice-president.

The choice of running mate, especially for parties that have a realistic chance of forming the next government such as DPP, MCP and UTM, is a big deal because you are looking at the potential vice-president of the country and, therefore, a potential successor of the president should something go wrong through resignation, impeachment or indeed death.

That is why a section in DPP, for example, were wary of reports that Mutharika had picked UDF’s Atupele as running mate as they are looking at the history of the two parties and are afraid that, in an event that something happens to the President, the party will be swallowed and their futures doomed.

But the justification for choosing Atupele was very simple and it is that the permutations on the ground have changed as there is MCP and UTM pushing hard on the ground even in the Southern Region which DPP considers its bedroom.

The President is looking for the one million votes UDF claims to have possibly in the Eastern Region to safeguard his contract at the State House but those against it argued that this is just scaremongering and that DPP is big enough to go it alone and win the election.

That is why names such as Kondwani Nankhumwa, Bright Msaka, Samuel Tembenu and Henry Chimunthu Banda were being thrown into the picture as possibilities to partner the President as running mates.

The biggest problem with our parties is that there is no proper succession plan and, so, everything is left to chance, very loose and to the last minute under the prerogative of the presidents.

This is the genesis of the all the chaos and the unwarranted secrecy surrounding the processes of choosing running mates in all political parties.

That is why you hear DPP talking about Mutharika as the only one who has a right and only one who knows who to pick as running mate while UTM gave power to Chilima to pick a running mate who will eventually be vice-president of the party while it should be the other way round.

At the end of the day, MCP’s Chakwera got it right to name his running mate right in advance.

That is a clear succession plan everybody sees and approves unlike the confusion in the other parties which is causing debilitating divisions.

This confusion exacts a heavy price on Malawians as taxpayers’ money is spent on offices of vice-presidents when we, as a nation, do not get full value from them as a result of the constant fallouts between presidents and vice-presidents which emanate from the way running mates are picked.

The secrecy and delay happen because there is no transparent succession plan and criteria in the choice of running mates.

It is left late and down to the presidents of parties because each party wants to see what others have done and, in the end, the criterion is region, tribe, religion, whether young or old, it is all chaos.

For example, in 2014, DPP went for Chilima, a man with a suave, young handsome face from the corporate world and from Ntcheu to balance the ticket of old Peter, a brother to the former president Bingu from Thyolo, all done to attract the youth vote.

In the same 2014, you had PP’s woman leader Joyce Banda from the Eastern Region going for the young intelligent ‘Ben 10’ Sosten Gwengwe from Lilongwe or Dedza to project modernity and attract the same youth vote.

It is such naivety that delays and clogs up things and, in the end, because it is not coming from a succession plan in the party, it does not end well and we have vice-presidents that have no constituency in political parties and are pariahs most of the time.

Presidential candidates can do better on the delays and secrecy and the lack of transparency in choosing running mates. We are living in the 21st century for goodness sake!

Goodall Gondwe speaks on government spending ahead of polls