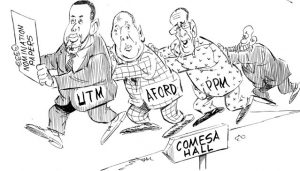 It was nominations week as Malawi Electoral Commission (Mec) received eligibility papers from presidential candidates with their running mates at Comesa Hall in Blantyre.

After the drama of the last two weeks, we now have the white smoke in that we know the individuals and running mates carrying the hopes of their parties and Malawians at large.

The delay by some candidates to name their running mates had its own ramifications.

It sent our hearts on unnecessary somersaults but in the end Malawians persevered until the appointed time.

So far, only Malawi Congress Party (MCP) president Lazarus Chakwera spared Malawians the blood pressure in that he named his running mate Sidik Mia well in advance while the ruling Democratic Progressive Party (DPP),UTM, People’s Party (PP) and United Democratic Front (UDF) made our tongues wagging until the last moment which somehow caused tension in these political parties.

There have been twists and turns. We learnt last week that, after months of speculation and negotiations, PP and six other parties under the banner of Tikonze Progressive Movement had partnered with newly registered UTM in an electoral alliance ahead of the May 21 Tripartite Elections.

But before the followers of the parties could celebrate, 72 hours later the marriage ended before it could even begin after differences over who would become running mate.

But will coalitions mean anything to results of the elections come May 21?

To answer this question, one must first of all see the pattern in terms of how Malawians vote and the discovery is that, except in 2009 elections in which the late Bingu wa Mutharika won throughout the country, the vote is largely regional.

The other way is to look at how Malawians voted in 2014 and who got what and then see what kind of coalition has a chance of grabbing power in Malawi by looking at how the first four candidates performed.

The other eight candidates including Kamuzu Chibambo and John Chisi got less than two percent of the total votes.

Is it not obvious then that the only alliance that matters, on the part of opposition parties, is the one that should involve the top four parties if the aim is to defeat DPP in the coming election? Or, indeed, if DPP wants to win resoundingly, should the aim also not be to pick one of the three so that the party maintains power?

UTM and Saulos Chilima did not participate in the 2014 election or any elections for that matter for us to know where their stronghold is and who would vote for them and what number of votes they would amass although their campaign is to ask Malawians to vote differently and not based on regions and tribes.

Banda as a PP candidate could only amass 1,056,236 votes and came out number three out of the 12 candidates when she was president and in government with unlimited access to government resources in 2014.

Since she got back home in April last year from her self-imposed exile, she has done a marvelous job in putting PP back on the agenda after it was leaderless and lost so many key members such as Uladi Musa to other parties.

The question we must ask is: Would PP and Banda improve her 2014 tally, now that she has no benefit of government resources and propel her party to power and form the next government after May 21?

Would any small party that can come on board such as People’s Progressive Movement (PPM) led by characters such as Mark Katsonga, who got negligible votes in 2014, make any difference?

Of course, voting patterns can change as we experienced in 2009 when the late Bingu wa Mutharika was retained into office through votes from throughout the country largely because he did well during his first term and voters saw him doing more if it was not for the scheming opposition marshaled by the then MCP which had a majority in Parliament.

The late Mutharika also had a masterstroke up his sleeves in that he was an ardent admirer of founding president the late Dr Hastings Kamuzu Banda which resonated so well with the former’s supporters after years of volleys of abuse thrown at them by those who wanted to erase history during the early years of multiparty democracy.

But holding everything constant and looking at the numbers in past elections, the only alliance that can work in the opposition is one that involves MCP and parties such as UTM and PP because that would mean such an alliance will have enough votes from throughout the country to defeat DPP.

The way things have panned out this week, DPP should be smiling from ear to ear knowing that what I have described above in the opposition is impossible with conflicting egos and empty feel-good factors very much prevalent.

For DPP, on the other hand, the only alliance that could bring it votes is one that involves itself and one other party such as UDF from the top five.

It is in realisation of this fact that it has been courting UDF, albeit with little success, because the party in power is looking for the one million votes that the yellow camp claims to have in the Eastern Region.

Unfortunately, demands and counter-demands got into the way, thereby causing tension in DPP, which frustrated everything.

The other minority parties that wasted our time at Comesa Hall this week are just that.

They are looking at these elections as public relations stunts through endorsements and national visibility.

They would not bring anybody with votes. Alliances with them may not add value to May 21.