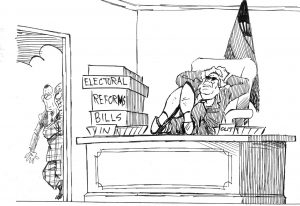 Parliament largely complied with the February 3 Constitutional Court ruling ordering a fresh election in 150 days from that date by passing three bills that will facilitate the poll.

In so doing the House has attempted to create an enabling environment that will facilitate the application of 50 percent-plus-one definition of the word ‘majority’ to be attained by a winner in the presidential election, among other provisions in the three bills.

The House’s Public Appointments Committee (Pac) also fell in line with the Constitutional Court order by conducting an incisive inquiry, broadcast live to the public on radio, into the capacity of the present Jane Ansah-led Malawi Electoral Commission (Mec).

The committee recommended that the present Mec commissioners be fired and replaced with another electoral body that will retain the confidence of all stakeholders.

The report from the committee repeated exactly the same line that the Constitutional Court said in its judgement on February 3 in Lilongwe that the present Mec is incompetent.

All this put together ends at the doorstep of President Peter Mutharika.

It is essentially up to him to act on both issues and so far, there has not been any movement, at least by the time I was writing this.

Presidential spokesman Mgeme Kalilani, when queried on the matter, gave an impression that his boss is not in a hurry and he cannot be rushed.

Kalilani also gave an impression of a president who does not share the view of Parliament that the matter is an urgent one and that the clock is ticking, insisting that the President will decide on the commissioners at his own appointed time.

In other words, the President is saying the worried nation concerned about the Constitutional Court judgement tight deadlines can go to hell and hang or rot. He is taking his time.

And so, the debate is raging as to what happens if the President decides to retain the same commission.

How can the deadlock be resolved because clearly the other stakeholders, including Parliament, do not want this Ansah-led commission, which the Constitutional Court declared incompetent, to be near any future election?

Meanwhile, time is running out especially that now the 150 days are no longer 150 with Parliament passing a law that fixed the presidential election on May 19, which is just two months away

All this cannot take effect unless President Peter Mutharika assents to the three bills that Parliament passed about the election in order for them to become law which, again, he has not done.

Once again, it is a cause for worry to Malawians who want to see the election that the Constitutional Court ordered to correct the anomalies in last year’s May 21 presidential election which was declared a nullity.

This is the beginning of trauma that the President may inflict on the nation although there is a process that involves the bills going back to Parliament, in case the he decides not to give his assent.

The party’s legislators rejected a Constitutional Amendment Bill which needed a two-thirds majority to pass in the House and they stayed away from the House at some point just to derail the process of pushing business that involved election related bills.

It is easy to suspect that the President would try to use his powers to toe his party’s line by vetoing the bills.

Then, of course, there is the appeal in the Supreme Court against both the stay of the Constitutional Court judgement as well as the substantive matters of the orders.

Could this dilly-dallying by both the President and Mec to kick-start the process of an election that is just two months away be an indication that the establishment still retains some hope in the appeal in the Supreme Court?

Is this why Mec has appealed against the refusal by the Constitutional Court to stay its own orders to execute the ruling in the Supreme Court and the matter is coming up on Wednesday next week?

Does this mean the electoral body wants the process halted before it could even begin?

It is certainly the right of appellants to ask the Supreme Court to have a say on the matter, but it is not in their interest to appear to be in contempt of the lower court because it does not help their case.

Courts or judges will look out for each other and, as Judge Dingiswayo Madise stated, those who seek equity must come with clean hands.

This is not good for Mec which wants a process of election halted when nothing will be stopped because the body has not started anything.

The country is slowly getting into the mood of elections especially with all the alliance talks going around endlessly involving even the DPP which has gone into bed with the United Democratic Front, its mother party.

President Peter Mutharika and Mec must do the needful.