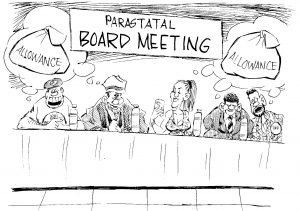 During the Hot Current programme on Times TV last week, I threw a gauntlet to the public to show me any parastatal organisation or state company that has made profit and declared the same to government and then deposited the money into Account Number One for Treasury during the past twelve months.

As I write this, no parastatal CEO has so far come forward to say I made profit.

This is the state of our parastatals. They do not declare anything to their shareholders who happen to be the people of Malawi through their government.

But President Lazarus Chakwera last week announced the appointment of the new board of directors for 67 parastatals; whose composition is largely of professionals in the field they have been appointed into.

This was after Chakwera dissolved the boards of directors in all parastatal organisations, a move critics said is a step to clean up the rubble in the state companies.

My reaction as soon as I saw that list of the new board of directors for public enterprises was that probably on paper, progress has been made but sadly; the taste of the pudding is in the eating.

Change will only be achieved by the action of the new boards.

Minister of Information Gospel Kazako said as Tonse Alliance, they have wanted to have people in positions that agree with their agenda and that positions were not given on appeasement but rather looking at looking at qualifications and experience, among others.

He could have said politics is the main contributor to the malaise that we have seen in boards all these past years.

This time, the boards largely consist pure professionals, a few chiefs– not the vocal ones that bored us to death for the past six years through their outright political bias and political prostitution– religious leaders and members of the civil society.

The only blot is from the women movement and they are right.

Women are hugely underrepresented in the boards, something that is totally unacceptable in this day and age.

I believe this is the reason that even Human Rights Defenders Coalition (HRDC) has joined the fight and have said the boards have broken 60-40 rule as per the relevant laws.

It has to be reversed.

That said, during the past 26 years of multiparty democracy, parastatal boards have been used for the exclusivity of board members, ruling party cadres and ultimately government itself but what Malawians want now is change, real change for that matter.

The board members were mostly political stooges that ranged from hand clapping chiefs as well as other stooges in the civil society and a few professionals who also toed Democratic Progressive Party (DPP) political line. Malawians demand change.

This is because Malawians know that what was always paramount on the mind of many board members were cash allowances and not improving the operations to deliver to Malawians what was in their mandate.

In the boards, it is worse.

Managements of parastatals are forced to give undue allowances that include attendance of funerals as well as political party function.

This total abuse can only lead to one thing and it is the collapse of most of the parastatals.

The parastatals and state companies are in serious financial trouble that, I said earlier on, have not declared any dividend to government for many years now.

I dare say again; Malawians want to see a change with the present boards.

Malawians will never resign to their fate as far as the running of this country is concerned.

Make no mistake, many parastatals and state companies are monopolies and therefore viable entities.

They are in the rotten state simply because of abuse.

Why should Macra, Escom, Mera or water boards not be viable? They are all monopolies with an untapped market ready for the taking.

Macra, for example, makes the easiest of money which they simply bank without doing any work. There is no such a thing as a cost of sale at Macra.

But DPP politicians knew Macra is a cash cow and made sure that the regulator’s money does not go to Account Number Obe but must be chewed right there at source.

Fortunately, Malawians had other intentions and kicked the party out of power.

Procurement too is a serious problem with procedures flouted at will that as we speak top management at Macra including the former director general, financial director and procurement specialist are currently answering various charges in courts after being arrested on matters bordering on such.

Then there is Escom that has so much potential with many Malawians asking to be put on grid but in total collapse that as we speak it is demanding a bailout of K53 billion from government after it has been run down as a result of abuse.

Work is simply cut out for the new boards of directors for such parastatals to bring them back to life for the sake of progress.

Vice President Saulos Chilima has been leading the reform agenda in this country but now he has new impetus that the boards are in place.

Malawians are dying for a new direction in state companies.

Do not get cocky