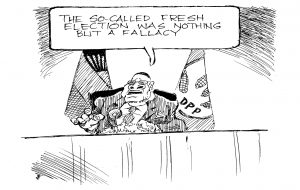 While everyone else has moved on and fully accepted the results of the court ordered June 23 2020 presidential election, it seems our former president Peter Mutharika is finding it hard to come to terms with the fact that he is no longer a tenant at House Number One.

Take, for example, his rambling the other day. Instead of enjoying his retirement, which is in its infancy, at his lakeside home in Mangochi District, Mutharika or ‘adadi’ (to his followers) opted to evoke some emotions by claiming that the poll which ushered his successor, President Lazarus Chakwera, into office was nothing but a fallacy.

Now, before the old man loses it completely, would someone high up there in Democratic Progressive Party (DPP) please swiftly and wisely counsel him that Malawi, as a country, has moved past that trajectory. In fact, most of us do not, for a second, fancy being reminded of the unnecessarily long drawn-out battle that Malawians waged to get Mutharika out of State House or to put it bluntly, out of their skin. Here is a man who pretended to turn a blind eye as million-man matches were happening all across the country in the aftermath of May 21 2019 general elections and tried to pull every trick in the book to cling on to the presidency; going to the extent of trying to force two highly esteemed judges into their early retirement.

I, for one, I am not surprised at all with the cue coming from Mutharika; in fact, he is showing his true character. This is a man who, as he hopelessly tried to cling on to the presidency, refused to bulge and yet the whole country was on fire. We are talking about a man that, after allegedly being pressured by other heads of State and governments at a summit he attended in Russia, tried to hoodwink everyone by singing the ceasefire tune once he landed at the airport. But, this time, everyone saw him for what he is; a desperate old man who did not have the best interests of Malawians at heart. And decisively so, Malawians kicked him out of State House and now he wants to insult the intelligence of the very people that had accorded him a chance to govern this country by ‘pissing’ all over their decision to choose a new government? Please, Mr. former president, give people a break.

The ideal thing for Mutharika to do now, other than enjoying the breeze from the beautiful lake with his family, is to try and organise what is left of the once mighty DPP which has been left bruised and battered after it sired UTM and now it appears there is another ‘breakaway’ faction that probably is giving ‘adadi’ sleepless nights; leading to the hallucinations about the June 23 2020 election.

He did lament that there are some within DPP who are ‘trying to take the reins of power by force’ and want to sell the party to what he described as ‘the highest bidder’. If the former president has some decency left, this what should be pre-occupying his time; settling the stirred waters in the party and granting the people agitating for his exit their wish because, like it or not, Mutharika will have to go sooner or later. He is over 80 and certainly not getting any younger. Convention or no convention, the former ruling party surely could use some transition in leadership.

No sane Malawian would call into question the legitimacy of the incumbent occupant of House Number One after he resoundingly beat Mutharika and one Peter Driver Sinosi of Mbakuwaku at the ballot. Mutharika certainly was off key when he repeated such outbursts. If there are concrete issues, the courts are always there to help, like Malawi Congress Party and UTM leaders showed us through the historic presidential election result case.

Speaking of the courts, the heroic deeds of the five Constitutional Court (ConCourt) judges did not go unnoticed as just the other day news was all over town that Judges Healy Potani, Ivy Kamanga, Dingiswayo Madise, Mike Tembo and Redson Kapindu have won the 2020 Chatham House Prize for bravery and upholding the independence of the Judiciary.

It must have indeed taken a lot of guts and selflessness on the part of these esteemed members of the bar, at a time when the future was uncertain and the country was literally at a standstill, to come up with a decisive position in their landmark February 3 2020 judgement that ultimately paved the way for the holding of a fresh presidential election

The story of the five ConCourt judges is one that we will live to remember and will certainly be told for a lifetime.

He is up to task