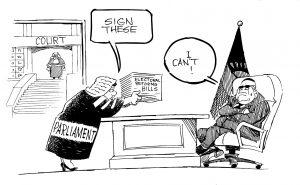 In a fast-paced world where economies quickly react at the slightest change, Malawi should count itself lucky that it has not recorded any Coronavirus cases yet (well, at least by the time I was putting together this entry) when a lot of countries globally are grappling with the disease. But that is not to say that we are immune to the problem because, believe me, disaster could strike anytime, looking at how fragile Coronavirus is. I hear neighbouring Tanzania has already been affected, as has South Africa where most of our kinsmen trek to, in the hope of eking out a living. The end could be nigh, dear sons and daughters of the soil, unless of course we choose to adhere to the precautionary measures as spelt out by Ministry of Health as well as the World Health Organisation. Perhaps those who have, over the years, been vigorous on the ground implementing water, hygiene and sanitation projects had hindsight after all.

Now, it appears while our friends elsewhere have been pre-occupied with the Coronavirus pandemic, it has been the complete opposite here in Malawi where politics has continued to dominate the scene. Just the other day, President Peter Mutharika pulled what I would call a ‘stinker’ by refusing to append his signature to the crucial electoral reforms bills that had been passed in Parliament, in line with the directive from the Constitutional Court (ConCourt).

The court had ordered that the legislative arm of government should create an enabling environment for the freshly interpreted 50 percent-plus-one system of determining the majority winner in a presidential election, and Parliament was equal to the task as it went about fulfilling the determination of the ConCourt, which included assessing the capabilities of commissioners at Malawi Electoral Commission, including the Chairperson herself, Justice Jane Ansah.

Everything was moving at a steady speed, with the date for fresh presidential election already set, until Mutharika decided to exercise powers vested in his office by choosing not to assent to the electoral reforms bills. That was not all; the incumbent Malawi leader also tossed out of the window a parliamentary Public Appointments Committee report that recommended the firing of Ansah-led team of commissioners.

The move by Mutharika should not be viewed lightly, as it clearly shows that the three arms of government are not operating in sync with each other. Much as it might be argued that there has to be clear separation of powers but, in my considered opinion, that should not override the need for the Executive, Judiciary and Legislature to operate at the same wavelength for the good of all people in the country. Now, should we conclude that the ConCourt, Parliament and indeed by extension Pac were wrong and that only the President knows what’s best for Malawi in as far as the issue of fresh presidential election is concerned?

And to make matters worse, Mutharika did not have the tenacity to face Malawians and break the decision to them personally but chose to send one of his aides, Presidential Press Secretary Mgeme Kalilani, to do his bidding. I found this a bit off ‘ish’, considering what a very delicate matter the issue at hand is, since it was the very reason there were ceaseless public protests on the streets following the May 21 General Elections and the same led to the case which precipitated the ConCourt judgement. The President should have been bold enough to give a public address, as there is a lot that can be concluded just from the manner in which a message is being relayed and how the speaker is speaking; now in this case, would it be right to infer the emotions or lack of it in Kalilani during the presser, on his boss?

The President argues that the newly formulated bills for which Parliament sought his endorsement were a ploy by the legislature to usurp powers of the Executive arm of government. Well, that might be up for debate because others hold the view that the electoral reforms bills held the answer to ending, once and for all, the disputes that have marred presidential elections in the country in recent elections. It need not be overemphasised that a president that garners 50 percent-plus-one of the votes cast would rule with so much vigour and colour, since he or she would have the blessing of the majority.

It certainly makes no sense to keep holding the country in balance; the best Mutharika would have done was to sign off those bills and assure Malawians that he is ready for the fresh presidential election on May 19 so that he can beat both his doubters and opponents fair and square. At least he would have had one thing less on his to-do list; he recently fired his Cabinet and is yet to name a fresh one (by the time of my writing). He should have cleared the electoral reforms bills hurdle as we all patiently await the Supreme Court of Appeal hearing on April 15 on the ConCourt judgement. Withholding the assent could be a recipe for disaster.